‘Travels with an Archaeologist’ by Richard Hodges 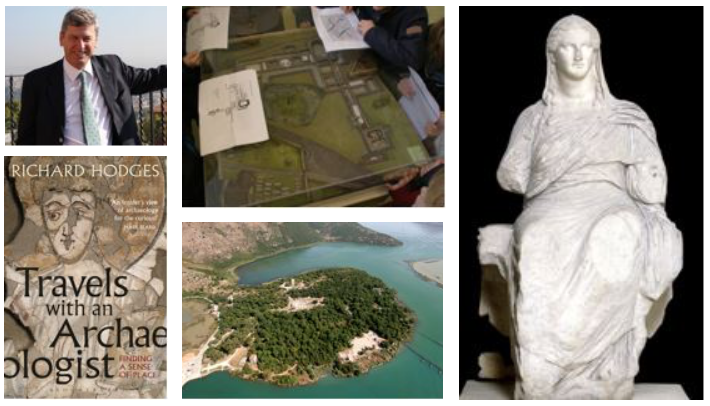 In April of this year the Civic Society was honoured to host President of the American University in Rome, Professor Richard Hodges, to talk about his upcoming book release. President Hodges describes ‘Travels with an Archaeologist’ as a series of essays “about places and people, and above all their spirit.” To him, archaeology is about “hearing, smelling, tasting and touching past textures in our time. With these senses, in the company of friends, new places are created from old ones.” His presentation was similar in that it consisted of a collection of postcards revisiting the sites and people he has encountered throughout his distinguished career.
In his presentation and book he talks of people who both inspired and accompanied him throughout his career. He began by speaking about his very first experience in the field, an excavation of a Roman Villa in his native Box. The 1967 dig led by Henry Hurst (now Reader Emeritus at Cambridge University) provided the 15-year-old with a firm conviction that archaeology was to be his profession. As a bastion of local knowledge, and through supplying an arc lamp and fruitcakes (made by his mother) he became a recognised member of the team. His experiences drawing sections of trenches and digging on his days off in the cold of December meant, by the second campaign in the following summer, he supervised students many years his elder. Enamoured with these experiences Richard set up ‘The Box Archaeological & Natural History Society’ (which celebrates its 50th anniversary next year) and returns regularly to give talks and catch up on local news.
When he was 18 he embarked on another journey, this time as a first-year undergraduate he was to excavate in the “Greco-Roman paradise” that is Knidos, Turkey. He and Hurst were sent there with a task unbeknownst to them at the time, to find the lost limbs of a statue of Demeter unearthed by Charles Newton a century before him. Although they were never found, it did not matter to Hodges who wrote that he was “endlessly enchanted by this extraordinary setting for a dig.”
In the second part of his book, he describes finding the senses from his past travels and begins with Butrint where he first arrived at the suggestion of the British ambassador in Rome –Lord Jacob Rothschild. Upon arrival in Albania, it struck Hodges the 50 years of impoverishment made it feel like “visiting a film set on location at the end of World War II.” Every encounter became “a shrill lament about the loss of opportunity […] and profound fear of the future.”
The mere mention of Butrint, however, elicited a visible counter reaction; in the words of Virgil it was ‘a Troy in miniature.’ The first to present this with tender pride was Prime Minister Aleksänder Meksi, one of Albania’s renowned former archaeologists. Hodges describes upon seeing Butrint for the first time as it owning a “Homeric landscape” and finally grasping the meaning of the emotional Prime Ministers’ romantic lyricism for the landmark. An archaeological park was soon set up by ambassador Rothschild and his friend John Sainsbury, and can now expect one hundred thousand visitors a year to pass through. The wealth and status the park has brought the small nation has been immense and is a clear example of a world heritage site that works.
Further notable moments in his presentation that can all be found in his book were his breakfasts with tutor and mentor Colin Renfrew, Rome’s Non-Catholic Cemetery which houses the like of John Keats and Percy Shelley, and the disturbing scent of Gold at Roșia Montană, Transylvania. To end his presentation there was a short Q&A and book signing and to learn more of Professor Hodge’s travels the book is on sale for the reasonable price of £20 at the Corsham Bookshop.
Jujhar Garcha