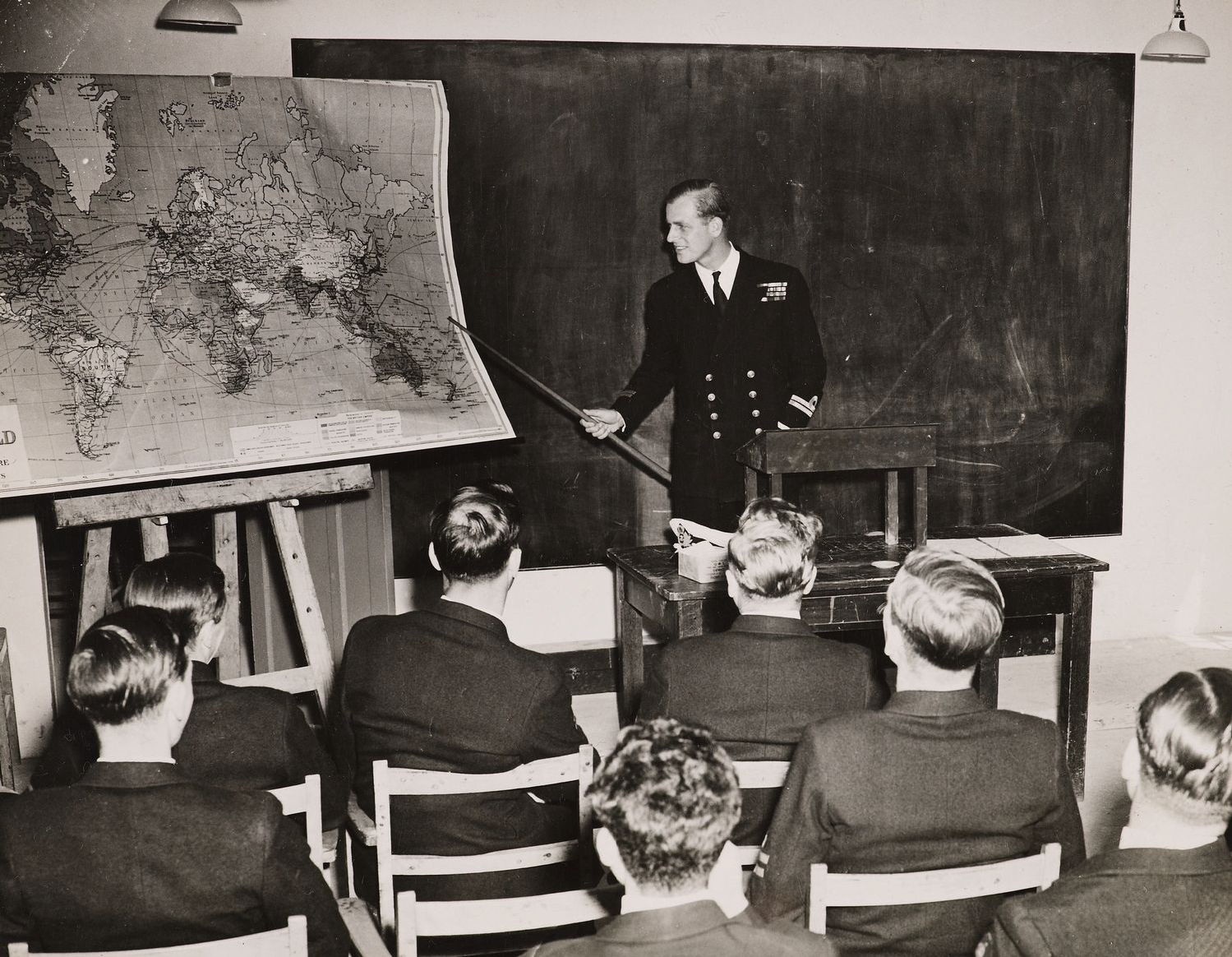 It was with great sadness that we heard in April of the death of our Queen’s right-hand man. Prince Philip had been part of our nation’s history for so many years, that it was inevitable that when remembering such a career, local people recall the relatively short period of his life spent in the Corsham area when he served as an Instructor at Royal Arthur (see photo. below), the Petty Officers’ Leadership Training Establishment [now the site of Wadswick Green].

Many anecdotes refer to Prince Philip visiting the Methuen Arms with some of his colleagues to play darts and skittles. We know that he became particularly acquainted with one of our local traders Joey Daymond: Joe was an extremely good baker and ran a bakery at 78 High Street (now a private house).

How many children were told the story, “ I remember when I played darts/skittles at the Methuen Arms with Prince Philip”. My father was one of those, and my uncle, who was also serving at Royal Arthur. Part of his task was the handling of correspondence, and he was instructed that if a letter was received which had an ‘E’ written at the bottom left-hand corner of the envelope, then that was to be passed immediately to Philip Mountbatten.

Commander Pat Hoare, in his book ‘Ceylon To Corsham’, relates the anecdote of Philip following the custom of asking his Commanding Officer if he could get engaged. The story goes that the Duke duly reported to his CO and said, “Request permission to get engaged sir and my fiancée said that if you refuse it won’t be very good for your career”! Having received the consent, he probably got in his car and tried to break his own speed record for getting from Corsham to the gates of Buckingham Palace in double-quick time!

For my own part, I can claim to have been present in 1947 to see Lieutenant Philip Mountbatten carry out his first public engagement following his engagement to Princess Elizabeth when he unveiled the Memorial Wall in the Garden of Remembrance at the bottom of Station Road. In all honesty, I only caught a glimpse here and there. I was six years old and standing with my mother on Station Road, and with the many people standing in front of me, my view was somewhat restricted. Nevertheless ‘I was there!

In 2012 the Queen celebrated her Diamond Jubilee, the 60th anniversary of her accession to the throne in 1952. Together with many organisations throughout the country, Corsham’s Area Development Trust (now identified as Corsham Tourist Information Centre) held a primary schools’ competition for pictures of the Queen. A selection of these were duly sent to the Queen, together with photographs of Corsham (including the Methuen Arms) and reminding them of their association with Corsham. We received a delightful formal letter from the palace,

There are probably many more local stories like these, if you have one, please tell us through our website. We would love to know if ‘You Were There’.