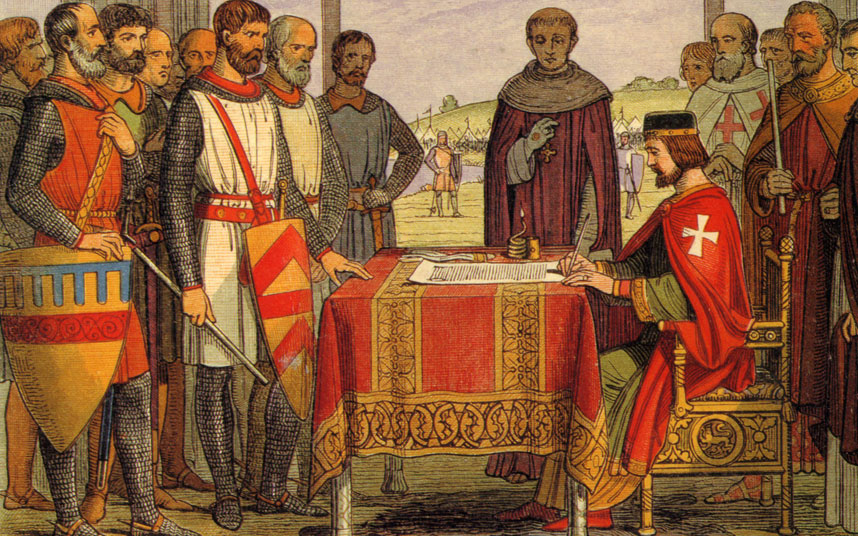 Originally it was planned that professor of medieval history David d’Avray would enlighten us with a talk on Magna Carta to coincide with its 800th anniversary, yet being occupied at the time it was postponed until February this year. This was really a blessing rather than a curse, however, as the 1216 charter could be said to be more important than the original 1215 version, or even the later 1225 edition.

David and his colleagues have not been short of work over the past year giving similar talks of this nature. Magna Carta, or the ‘Great Charter’, was agreed by King John of England at Runnymede, near Windsor, on 15th June 1215.

The 1215 charter anniversary has been slightly exaggerated, yet no matter its effectiveness (or lack thereof) it is an invaluable source showing Britain and its pervasive bureaucracy at that time. It displays the complicated governmental systems of the era with its interwoven Saxon and Norman influences, creating a more complicated picture in comparison to other contemporary countries’ systems.

The charter originated due to simultaneous strained relations with the king, his barons and the Church – which is discussed in more detail on the next page. In 1213, a party of rebel barons met with Archbishop Stephen Langton and the papal legate to air their grievances against the king. They urged John to agree to confirm the coronation charter issued by King Henry I which had promised to abolish ‘all the evil customs by which the kingdom of England has been unjustly oppressed’. The dispute escalated in early May 1215 when the king refused to meet the barons’ demands. Many renounced their oaths of allegiance to him and their capture of the City of London that same month was a turning point in their campaign. John by now had no option but to negotiate and settle with them.

Aggrieved by the manner in which Magna Carta was to be enforced, John sent messengers to the Pope in the summer requesting that the charter be annulled. In turn, the barons refused to surrender London until the charter had been implemented. Pope Innocent III was alarmed by the charter’s terms, and issued a papal bull describing it as ‘illegal, unjust, harmful to royal rights and shameful to the English people’, and declaring the charter ‘null and void of all validity forever’. Civil war soon broke out between King John and his barons. Magna Carta was effectively dead, but it gained new life in the early years of the reign of the next king, Henry III. In 1216 a revised version of Magna Carta was issued in order to regain the support of the barons. Regarded as the foundation of democracy in England, the charter’s terms only truly applied to a small proportion of the population.

Historians have tended in the past to focus on the significance of structures and revolutions, but by the late 1980s things had changed. Singular momentous occasions like the end of Apartheid and the collapse of the USSR signified the importance of narrative history. The Magna Carta’s fate could have been decided by such a singular event, the death of King John.

Should John have survived the First Baron’s War, where the disaffected barons aided by French forces made war on the king, the Magna Carta would have been lost no matter the result. Had he won the war it would’ve been torn up, and should France have won, Louis (an absolutist) would certainly not have allowed any limitations on his monarchy. When John died however, the people rallied against the barons and French with a new, less terrible, king. His death at such a time then almost supersedes the significance of the Magna Carta itself.

To many, most chielfy Northern barons, John was a detestable man who would sell their marriages and tax to the point of annoyance, such acts went further than greed and were deliberate attempts to antagonise them. His name continues to live on in infamy.

Stephen Langton (archbishop of Canterbury 1207-1228) was also one of the most important figures in the history of Magna Carta as a famous scholar and leading figure in the Church. He was born around 1150 to an English family in rural Lincolnshire and was likely educated in his local cathedral school. The Pope called him to Rome and made him a cardinal, before arranging for him to be appointed archbishop of Canterbury. King John refused to accept the pope’s choice of archbishop due to a combination of wanting to decide the appointment himself, as was the case with his predecessors, and moreover Langton’s belief that kings were by nature oppressive and likely to act with disregard to the law made him a natural enemy.

The threat of excommunication and rebellion forced John to accept Langton’s position. In 1215, Langton refused to give up command of Rochester castle to the king because John’s demand had been made ‘without judgement’. For this act John considered Langton ‘a notorious and barefaced traitor’, and suspected him of complicity with the rebel barons, a baseless accusation. Instead, Langton and his fellow bishops worked for a peaceful settlement – one that was to be enshrined in the original issue of Magna Carta in 1215.

It was during the years of Henry III’s minority that Langton was to become the champion of Magna Carta. In 1225, Henry issued what was to be the definitive version of the Charter. Langton pronounced a broad sentence of excommunication in support of Magna Carta. Anyone, king or baron, would automatically be outlawed from the Church if they violated the Charter. Langton was instrumental in promoting and upholding the Charter and thus ensuring its survival.