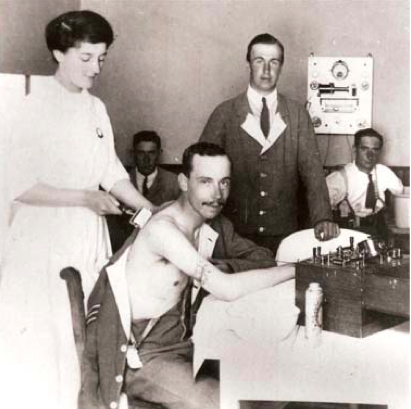 Memorial to the V.A.D. in Corsham Town Hall

As early as August 1914, the people of Corsham were making plans to establish a hospital in the town. According to local newspaper items recorded in CJ Hall’s book ‘Corsham a Illustrated History’ – “in September 1914, a number of Belgian refugees – women and children were housed there on a temporary basis, and later that month the rooms had been transformed into the Headquarters of a Voluntary Aid Detachment of the Red Cross, with 30 beds provided. Officers were billeted in a house across the road (identity unknown)”. With the outbreak of WWI our local Town Hall was equipped and ready to use as a hospital. The Parish Council immediately offered the use of a Fire hydrant, hose, and a duty fireman.

It opened 26th October 1914, with Commandants the Hon. Christian Methuen and Lady Goldney at the helm. There were 6 Medical Officers and three Chaplains. The VADs were led by an Assistant Commandant, two Quartermasters and 27 nurses. Their names are recorded on a large memorial to be found in the large room on the first floor of the Town Hall, and include such stalwart families as the Fullers, Goldneys , Coates, Gale, Gough, Pictor and Spackman. But there were others too, one Miss Gidden for instance, who married one of the wounded soldiers – a William Alford.

There was also a daughter of the Parkinson family, Irene, who lived at ‘Dunsford’, 9 Prospect, Corsham. (later the home of Tom Burnard, who gave the CCS many photographs of the town), who was featured in the February 2010

By 1915 the Parish Council found it necessary to remove the fixed seating around the council Chamber, and to have another ‘stove installed in the large ward’. In 1916 the Parish Minutes recall the concern being expressed at the importation of troops from Chippenham to Corsham hospital, when they had contracted measles.

Other townspeople were obviously keen to contribute to the war effort, with ladies knitting, and sewing, and events and entertainment held for the soldiers.

There was a Nurses Home provided in Pickwick Rd, and numerous photos can be found in Steven Flavin’s ‘Corsham Born and Bred, Books 1 & 2’ (many taken by Herbert Spackman) which record the events during the length of the war.

Whilst following this trail, I also came across a letter left to me by Joe James, which indicated that he was corresponding with a man in Berkshire, about an ‘electrotherapy room’ which was active in Church St, and formed part of the hospital. The picture overleaf shows treatment being applied and on the back of the actual photo it states “July 1918, Church St. Hospital”. Unfortunately the correspondent had passed away, and the family were unable to explain further. Research on the internet produced the following information:-

In 1855 Guillaume Duchenne, the father of electrotherapy, announced that alternating was superior to direct current for electrotherapeutic triggering of muscle contractions. Since that time almost all rehabilitation involving muscle contraction has been done with a symmetrical rectangular biphasic waveform. In the 1940s, however, the US War Department, investigating the application of electrical stimulation not just to retard and prevent atrophy but to restore muscle mass and strength, employed what was termed galvanic exercise on the atrophied hands of patients who had an ulnar nerve lesion from surgery upon a wound. These Galvanic exercises employed a monophasic wave form, direct current – electrochemistry.”

So it seems that innovative techniques for treating muscle wastage had come to Corsham.

By 1918 the hospital had 90 beds. Eight hundred and seventy five soldiers had been treated at an annual cost of £2,500. The ladies and all volunteer staff were highly praised by the Parish Council for their excellent work over the previous four years.

The hospital finally closed in August 1919.
Other sources: Peter Hendersons “ 100 Years in Corsham Parish”, and Wikipedia.

Casualties at the Town Hall

The Civic Society has been privileged to see the album of Kathleen Crisp which lists the first casualties accepted at the Town Hall in the early stages of World War One. Kathleen, who married Dr Wood of Corsham, was the mother of Peter Wood, a friend of Civic Society member Jim Ball. Many of the men appear to have written their names themselves and they include their service number, regiment, and sometimes where they were wounded and details of their actual wounds. Below are extracts, as written, of some of the entries and samples of a couple of the pages.

The first casualty is “Pte William Taylor 7288 Lancashire Fusiliers 1st in Hospital”, the second is “Corporal S F Garner 1st Batt. The Kings Own Royal Lancaster Regt. (2nd in Hospital)” and the last “10239 Pte Baswick H.O.R.L. frostbites Feb 2nd 1915” although the latest date mentioned is “ 673 Pte J Ball 2nd Gordon Highrs March 4th 1915 Wounded Nov 7th Head and Hip In hospital with Appendicitis”. Private Ball drew a shield in which is written ‘By DAND’, the motto of the Highlanders, and attached a piece of tartan to his entry. 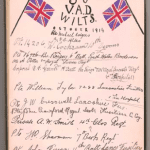 Pages from the album of Kathleen Crisp, courtesy of Peter Wood 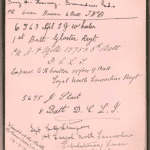 Pages from the album of Kathleen Crisp, courtesy of Peter Wood

In all there are some 89 men listed on 12 pages. The men came from battlegrounds such as Aisne, Ypres, Lille, Bathune, Labassee, Armentiers, Plugsteers and India. And their regiments were English, Welsh, Scots and Irish. There are many instances of frostbite as well as rheumatism, influenza and gun shot wounds.

These must have been some of the first men to be wounded in the war. And perhaps some of the lucky ones? One wonders what became of them. Did they survive their wounds? Were they invalided out of the Army? Did they rejoin their regiments and get sent back overseas to see more service?

These entries are a fascinating and poignant reminder of the fate that could await servicemen and also of the need for those back home to care for them.