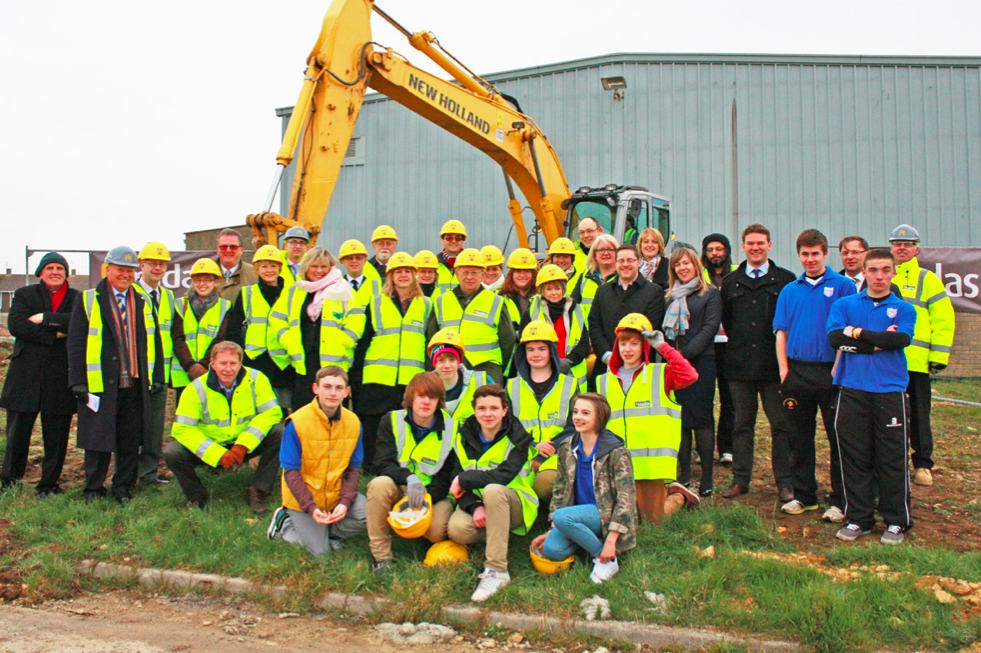 Midas, the main contractor for the community campus, has set up its site office and signs on the Springfield site and actually started work. During July and August this will be happening inside the Leisure Centre and some activities are being affected by the refurbishment work on the sports hall, the squash courts and the movement room. Below is a picture of the ‘turf cutting’ event on a chilly April day.

Midas’ Bristol office issued a press release in April about the award of the £10 million contract by Wiltshire Council. This said: “Midas Construction has a long track record of campus style and community related projects and can draw on extensive experience of being considerate contractorstoensurethatwearegoodneighboursthroughouttheconstructionphase”. Italso stated it is working towards completing the work by the end of 2014, but we’ll just have to wait and see how realistic this new completion date turns out to be. You can find out more about the company, which operates from several offices across the South West, on www.midasgroup.co.uk. Midas will from time to time issue a Newsletter to keep neighbours and visitors in touch with the progress on the site. The point of contact for concerns or queries in connection with the construction is the site-based Senior Project Manager – Graeme Young. He can be contacted on 07816 649 003, or c/o Midas Construction Ltd, Site Office, Beechfield Rd, Corsham, Wiltshire, SN13 9DN. For Issue One you can go to: https://dl.dropboxusercontent.com/u/47728031/Other/ Midas%20Campus%20Newsletter.pdf

Before April you will probably have noticed that there was an extended period after the initial phase of ‘enabling works’ had ended when there was no visible evidence of progress on the site. Behind the scenes a lot of detailed work and negotiation was going on to finalise the construction contract and bridge the gap between the agreed budget for the project and the actual cost of the ‘work packages’ as identified during the tendering process. Apparently this is a normal part of the process of delivering a major new development, but in this case it did take longer than expected. Many found the low level of public communication to be frustrating, although the Chairman of the Shadow Community Operations Board (COB) has provided regular updates at Area Board meetings and in the Town Council newsletters. There is now a dedicated section of a new website http://corsham.ourcommunitymatters.org.uk/springfield-campus/. This offers the opportunity for anyone interested to comment or ask a question or volunteer to get involved.

Much of the work of the community representatives on the COB was also on hold until recently, but the Board is now gearing itself up to set up working groups to look at key aspects of how the new campus will be run. As the concept of a community campus providing council services alongside the community space is new, Wiltshire Council has asked the Royal Society of Arts (RSA) to carry out research to help them develop ways to make the ‘campus programme’ work. They will focus particularly on the Corsham Community Area as the Springfield campus is set to be the first of eighteen projects across the county. Over the past few weeks the RSA have been interviewing a variety of interested parties in Corsham and further afield. They describe their areas of interest as ‘community capacity building and understanding local assets, designing the governance model, culture change and learning dissemination’. What that all means will hopefully become clearer later– their first feedback session covering their preliminary findings is due in late July in Trowbridge, and at some stage there should be some local consultation events nearer home.