The Great Thunderstorm of 2014 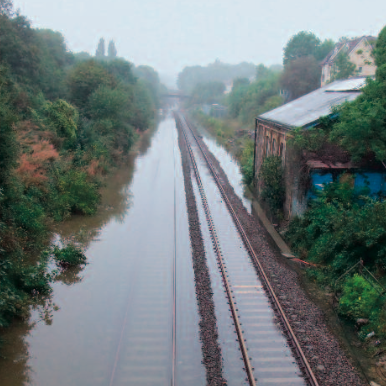 Few in Corsham will forget the mighty thunderstorm that hit the area during the night of 18/19 September this year. It was as if one of those great spaceships from science fiction was hovering above us for a couple of hours firing down great thunderbolts of lightning and a huge torrent of water. Many cellars and homes were flooded – the member of Corsham Fire Service who made a report to the Town Council said that when the first Corsham call came in they were in fact already in Bradford on Avon – not down by the river, but on top of a hill!

In all they received notification of 56 weather-related incidents, and crews arrived to help from as far away as Warminster, Malmesbury, Westbury, Bath, Yate, Bradford on Avon, Chippenham and Amesbury. Ninety people were evacuated. It was the simple volume of water coming down that overwhelmed drainage, and, as in 1935, it flooded the railway cutting.

By about two in the morning, the level of water was some three feet deep, forcing a downline train to stop by The Batters. The passengers were successfully evacuated from the Ladbroke Lane end of The Batters, and the flood gradually receded.

The last time a train was halted was on the night of 20/21 November two years ago, when cascades of water from the Yockney Brook halted a Bristol-bound train just short of the station site; but the water was not on a par with this year’s event, let alone that of 79 years ago.

David Gibbons (and with thanks to Anne Lock)

The flood of 1935, showing the station platform awash

The recent flooding of the railway line in Corsham and the marooning of a train is not the first time this has happened, for Herbert Spackman noted in his diary on 24 October 1882 that the station was flooded to quite a depth. The worst such flood occurred during the afternoon of Tuesday 25 June 1935, when a two-and-a-half-hour thunderstorm deposited three inches of rain on the town of Corsham and the surrounding area. The Yockney Brook, just west of the station, burst its banks, and the water started to pour down the embankment on to the sidings and the main line.

The last train to get through the station before the water completely flooded the track was the 3.15 p.m. Chippenham-to-Bath stopper, and by 3.33 p.m., ten minutes after the train had departed, the water level was 3 feet 6 inches above ground level. Within the next hour the water level was 9 feet in the station and covered not only the platforms but the seats in the two waiting rooms. The signalman on duty in the box was marooned for two hours, and all the electrical circuits were put out of action. 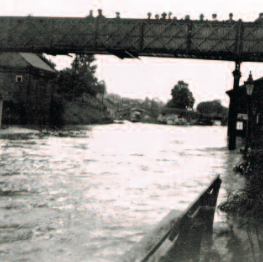 The flood of 1935, showing the station platform awash and spectators taking in the view

Trains were diverted from Thingley Junction to Bradford on Avon and then on to Bath and Bristol. Box Tunnel did not get flooded, as the line rises slightly before entering the tunnel, but the whole cutting beyond Potley bridge was covered with flood water. Passengers sitting in the 4.47 p.m. Bath-to-Chippenham train at Bath station were asked if they were travelling to Box or Corsham, and these people were hastily dispatched by bus, but this found it could not get through at Lambridge because of flood water, so it was turned around and proceeded to drive via Lansdown, Wick, Marshfield and Biddestone. The Box people finally got home at 8.30 p.m. instead of 4.59.

The next morning the bus operated in the reverse direction, and the first through train passed Corsham station at 11.15 a.m. Geoff Knapp remembers the occasion very well and can give an account of what happened that day to anyone who wishes more detail.