Sixty Years Ago, a disaster on Box Hill 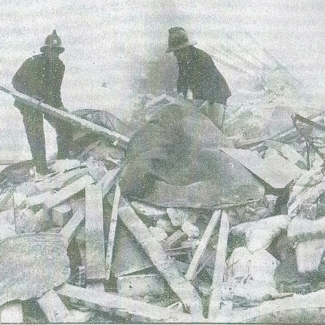 For many years Box Hill had 2 public houses, the ‘Quarryman’s Arms’, owned by Ushers Brewery of Trowbridge and the ‘Rising Sun’ owned by George’s Brewery of Bristol.  The ‘Rising Sun’ situated on the main A4 was a popular pub with a good skittles and darts team and every Christmas Bill & Joyce Griffin, the landlord and his wife, put on a superb party for the children of Box Hill and from the photographs taken over the years, you can see how much these parties were enjoyed.  I can be seen with my mother in the 1946 photograph! 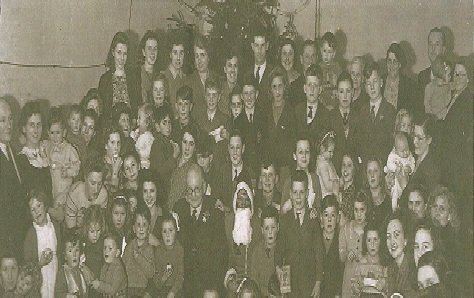 Rising Sun Christmas Party 1946 – the current chairman is in his mother’s arms, 2nd person standing on the left

In the 1920’s the Bath Gas Light & Coke Company bought out the Chippenham Gas works and began laying new gas mains from Bathford to Chippenham and these cast iron pipes were situated either side of the main road on Box Hill. Wednesday, December 4th 1957 was a cold, foggy and frosty night and at approx. at 4.30am a huge explosion took place completely destroying the ‘Rising Son’ public house and killing Bill & Joyce Griffin along with their 4 year old son Andrew but their daughter Jane was seriously injured surviving the blast.  Huge flames, some 30 feet high, lit up the whole scene as both gas mains, the 12 inch and the 4 inch had ruptured releasing coal gas into the atmosphere.  Above the 12 inch gas main were the main Post Office telephone cables between Chippenham and Bath and these were immediately destroyed thus stopping any telephone use for those wishing to contact the emergency services.  Charles Woodgate, a neighbour, drove to the Police station in Box to raise the alarm and fire units from Corsham, Chippenham and Bath rushed to the scene. 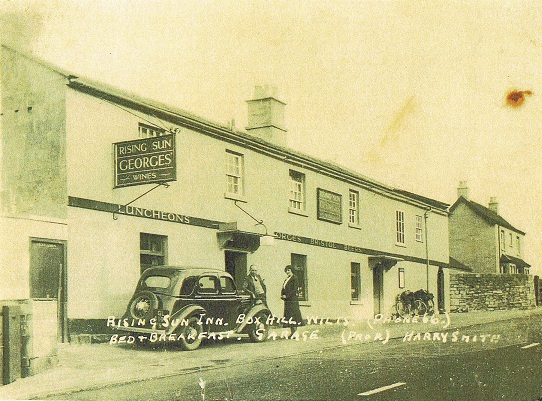 Thirteen year old Eric Callaway, who lived next door to the pub, was first on the scene and quickly found Jane Griffin and her aunt, Barbara Rogers and her 2 children who had clambered over the wreckage from their rooms at the east end of the building.  Box Hill unfortunately has a sand fault which runs from the top of the hill under a number of properties right down to the Bybrook and when the cast iron gas pipes were laid in the trenches all those years before, it wasn’t realised the problems that could occur 30 years or so later.  The current gas mains now lie along Beech Road and are made of a toughened plastic material than can bend with the movement of the surrounding land.
The main A4 was closed for months while pipes were replaced, but the ‘Rising Sun’ was never rebuilt, it became a bus stop instead.  The disaster never made the national papers as that evening the Lewisham rail crash took place with 92 people killed, another fog related accident.
I am indebted to Eric Callaway for lending me the photos of the public and a copy of the Bath & Wilts Evening Chronicle.
Michael Rumsey