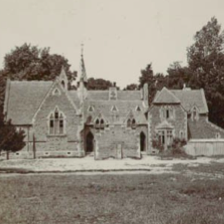 In the 19th century head teachers were required to keep a logbook in which significant items affecting the school were recorded. Some wrote at great length and others only the minimum but all the logbooks have very interesting and sometimes surprising entries.

When I first looked at the logbooks for Corsham Pickwick school, I was intrigued to find a section of the book covering the years 1863 to 1865 sealed up. The pages had been pierced and a tape threaded through and then sealed with sealing wax. On the next page was the entry: ‘The Managers have sealed up the foregoing pages lest the remarks made by the late master might prejudice his successor against some of the children’. 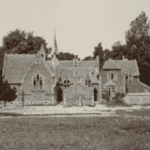 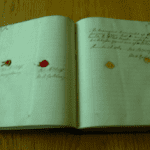 The sealed pages of the logbook 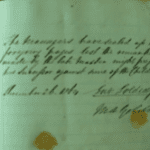 Explanation as to why the logbook was sealed 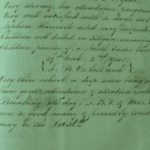 The last entry in the logbook

I consulted the archivist and he agreed that, as it was over a hundred years ago and in the interests of historical research, we would be justified in breaking the seal. He got out his scissors, cut the tape and revealed a story which was reminiscent of Dickens’ Dotheboys Hall.

The school was run by Thomas Vincent and his wife Elizabeth. It was clear that they hated the school, disliked the children and were disillusioned with teaching in general. They used corporal punishment at the slightest excuse and, quite unusually for logbooks, recorded comments about individual children.

Several boys were particularly singled out. ‘Commenced this week by giving William Fido a sound flogging for his impudence’. Jacob Hancock was said to have exhibited a most rebellious spirit which was attributed to over indulgence at home. Stephen Hancock (perhaps Jacob’s brother) was guilty of leading some of the juniors away from the school for the whole afternoon. He was in trouble again for bad behaviour during arithmetic ‘which made the Master very angry’.

The girls fared no better. Mary Hayward, for displaying a more than usual degree of stupidity during the arithmetic lesson, was given a severe beating by Mrs Vincent. A few months later she got another flogging for spoiling her copy book and saying ‘she did not care’. Jan Bath was reprimanded for displaying a very proud spirit while Elizabeth Lyne and Emma Stokes were in trouble on account of ‘their envious and jealous disposition’. Later it was reported that ‘a sad and tormenting spirit was exhibiting itself in Elizabeth’.

Several girls tried to be fashionable by wearing hoops under their skirts (like a crinoline) which was against the school rules. One of them, Mary Josham, was made a public example, she being considered the ringleader. Mrs Vincent also tried ‘to convey to the girls a sense of their foolishness in the dressing off their poor frail bodies to such a ridiculous extent’ by giving a lesson on the snail, which carries all its wealth on its back.

Mrs Vincent seems to have had what might be described as ‘a touch of Mrs Squeers’. Nothing escaped her notice as John Hancock found out. He was flogged for swearing during the dinner hour when ‘he no doubt thought he should not be heard – however Mrs V overheard him!’. Despite her obvious shortcomings, Mrs Vincent was loyally supported by her husband: ‘Mrs V usually so patient, painstaking and energetic, expressed herself as much discouraged on account of the stupidity exhibited by the 2nd class in Notation after all the labour she has spent upon them.’

The school was not achieving very well and, as the time of the school inspection approached, the Head became quite nervous. ‘Mind very uneasy fearing that when the day of trial comes the majority of the children will fail, as they appear to heartily love anything but their lessons’. As expected, the inspectors’ report was somewhat critical, on which the Head made the sardonic comment ‘What a blessed thing it is to have these little deficiencies pointed out!’

The Vincents left the school at the end of December 1865. Their last entry in the logbook was ‘Breaking up day. T.B.V. and Mrs V. have seen a good many and fervently trust this may be the LAST’.

The Wiltshire and Swindon Record Office at Chippenham holds three Corsham Pickwick logbooks covering the periods 1863-1887, 1887-1920 and 1920-1922. Anyone looking at the history of the school, or of Corsham more generally, will certainly find a great deal of interest in these records.