Memories of the Methuen School 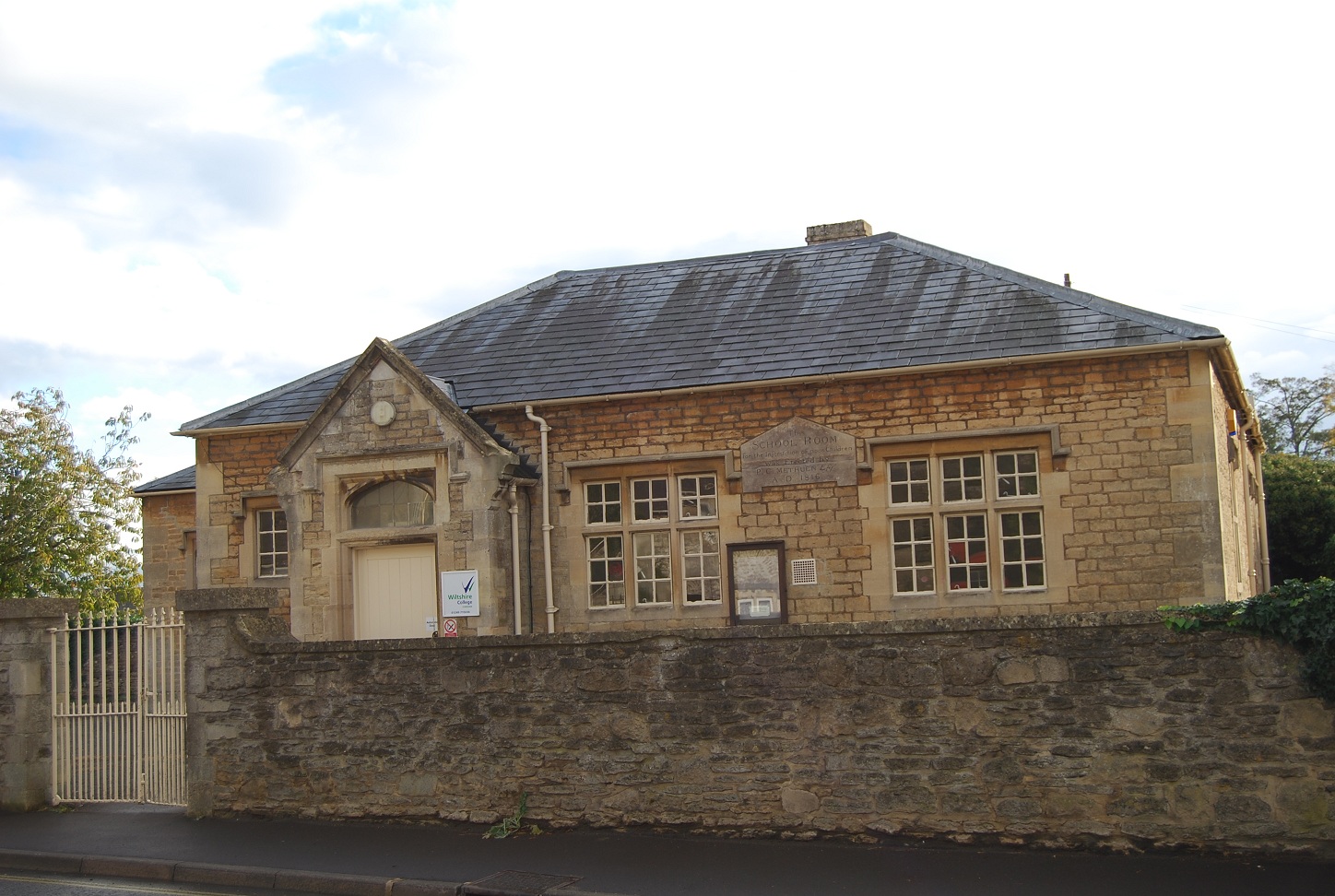 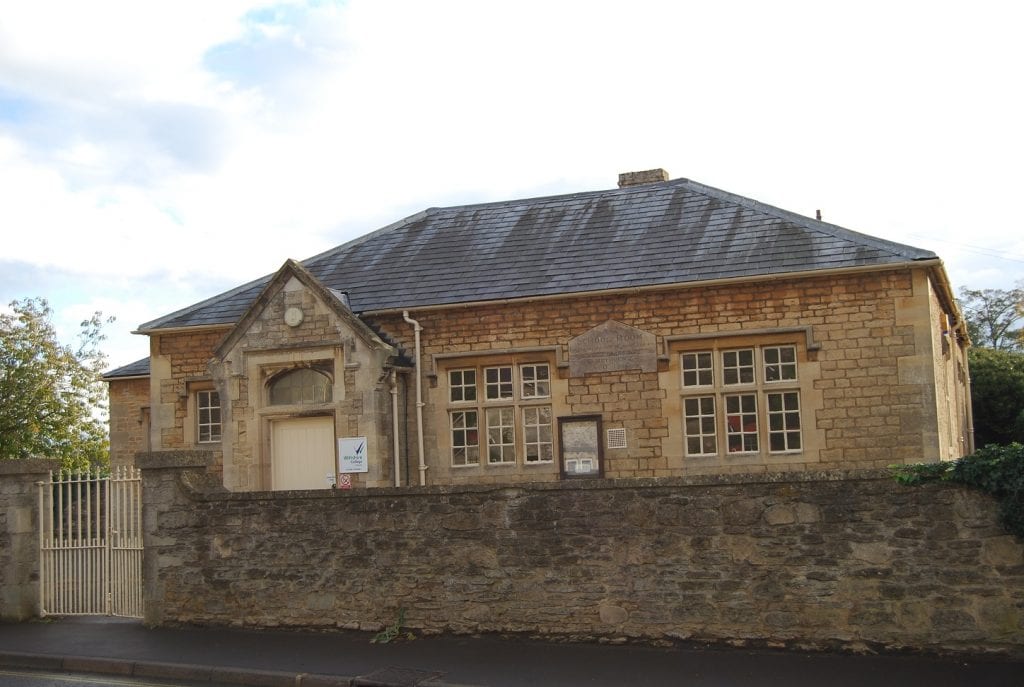 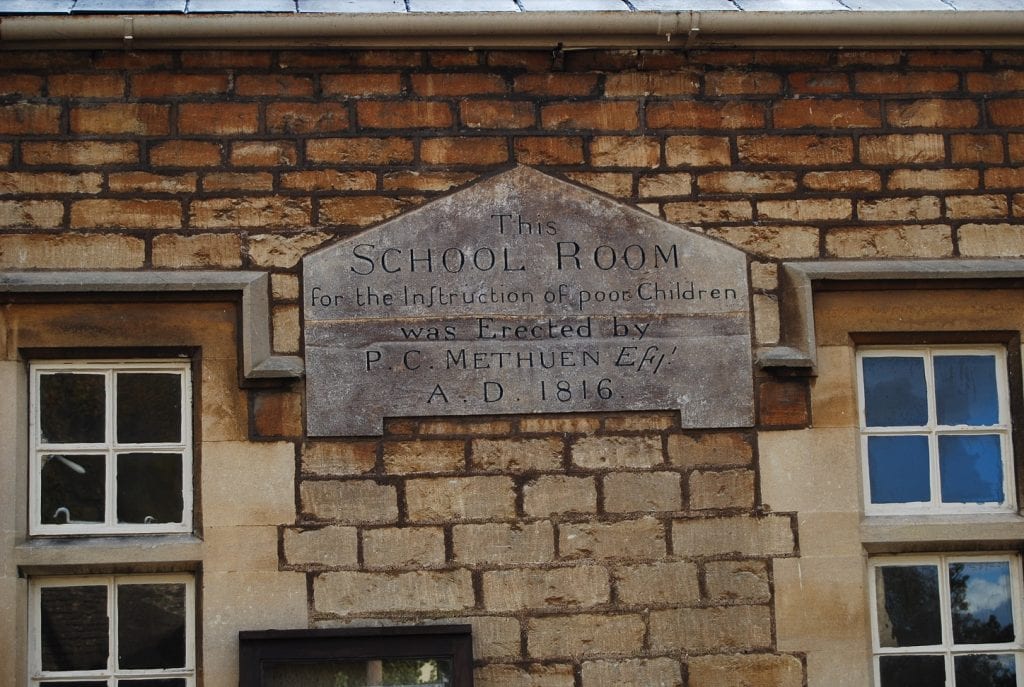 The school room for the instruction of poor children was erected by P.C. Methuen, A.D. 1816 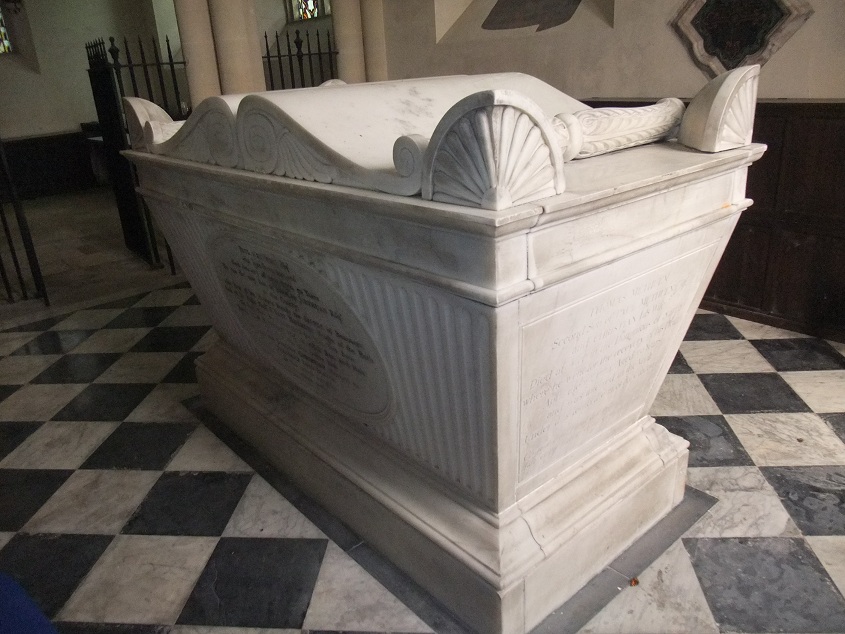 In Pevsner’s book on Wiltshire buildings, the tomb is described as follows: ‘A large white Grecian sarcophagus in the Methuen family chapel on the north side of the church’

In 1816, money was given by Paul Cobb Methuen (1752-1816) for the building of a 3-roomed school for the education of ‘poor children’. That building, in South Place, Corsham celebrates its 200th birthday this year and is still being used for education purposes by Wiltshire College, though the building itself still belongs to the Corsham Court estate. Ten poor children had been educated by the Master of the Hungerford Almshouses, but Edward Hasted, Master of the Almshouses between 1807 and 1812, refused to continue the teaching of children so it is suggested P.C. Methuen decided to build and endow a school to help poor children of the parish gain an education.

Paul Cobb Methuen died on the 15th September 1816, and is buried in North Wraxall Parish Church, so we are not sure if he ever saw the completed building. He had been, during his lifetime, an M.P and High Sheriff of Wiltshire. His son, Paul Methuen, became the first Lord Methuen in 1838.

The school remained independent until merged with the larger establishment built on the south side of the cricket field to the designs of Sir Harold Brakspear in the mid 1890’s. On the 5th September 1949 my father enrolled me into the school and paid 3/9 for a week’s school dinners to Mrs Booy, who helped with the clerical side for the Headmistress. My long term friends Edwin Brown and Paul Smith also started on that day and we remained in Corsham schools until 1960/61 and we are still great friends today, Edwin still living in Corsham while Paul resides in Carlisle.

Miss Weekes was our first teacher, a tall lady always dressed in black that either cycled or walked daily from Biddestone. She was born in Australia and came to the UK in 1914 and spent her teaching career at the Methuen School finally retiring on July 25th 1952. Miss Brett taught the middle infant years while the redoubtable Miss Hawkes was the Headmistress and taught or frightened the oldest infants! School dinners were taken in the Sunday schoolroom of the Methodist Church and involved a crocodile of children being guided across two roads and upon reaching the schoolroom we were served our lunches by Mrs Mower and her colleagues. Mrs Mower was a delightful lady who ensured we were well fed, even if the meat was occasionally a little tough. The Mansion House building was also used for classrooms and Mrs Stiles was the resident teacher there until January 1952. The Methodist Hall was also used for occasional assemblies but not on November 9th 1950 due to heavy rain, according to the school logbook.

I remember Miss Weekes organized May Pole dancing on May 1st, and on that day in 1950, the whole school turned out to take part at 11am, though, according to the logbook, it was rather windy. Music and Movement broadcasts were started in September 1950 and these were used each week by the classes, but it did involve the movement of desks and chairs to enable the physical activity required by the broadcast. During the M & M broadcast on the 6th February 1952 just after 11am, there was an interruption when John Snagg, the Senior BBC announcer, gave the information that the King, George VI, had passed away peacefully. On Friday, February 15th 1952, the whole class listened to the funeral service for King George on a large radio, lent to the school by George Dunnings (who lived opposite), quite a solemn occasion.

Exciting times were often had when the fire siren was sounded, the fire station being opposite to the school, so we were allowed out to watch the arrival of the firemen on their bicycles and the departure of the engine with the bell ringing furiously. We also went on walks too. Miss Hawkes once took us on a nature walk to the lake in Corsham Park and on another occasion we visited Corsham Court to see the peacocks, a glorious sight for us all.

Paul, Edwin and I left the Methuen School in July 1952, Paul & I going to the Regis School, while Edwin stayed at the Council School until we all met again at the Secondary Modern School in 1956. Miss Hawkes and Miss Brett retired on 31st October 1952 and the school finally closed for the Infants on 11th March 1953 when the children, staff and school equipment was transferred to the main school across the cricket field. The building didn’t remain empty for too long for once the Secondary Modern School was established in 1955, some classes were sent to the Methuen School because of the shortage of accommodation in the main school. Art, under the supervision of Mr Speck and Miss Orde-Smith was one subject taught there, the other being Technical Drawing led by Ernest Weller. The building is now used by the Wiltshire College for various purposes, art still being one of them.

Unfortunately, we have not been able to find any photographs of children or their activities in the Methuen School, if anyone knows of any photos the Civic Society would be delighted to view them. Two Society members, Margaret Shewring and Pat Whalley, have been kind enough to jot down their memories of their times at the Methuen School. Margaret joined her older sister Lorna when she was 4 years old at the school in 1937. Her memories are as follows:

Miss Weekes lived in Biddestone and walked to the school and home each day. She wore a long black apron to prevent the chalk spoiling her clothes. After lunch we had a nap on a wooden board in the classroom. Miss Weekes took us for walks to the gardens of Corsham Court and when we reached the Georgian Bath House we were told this was the ‘Fairies House’ and we had to be very quiet. We walked in pairs, holding hands.

During the winter a fire was lit in the large fireplace in the classroom. The space around the fireplace was surrounded with a large fireguard and Mrs Dunning, who lived opposite the school, attended the fire each day. Miss Brett taught the 2nd class and was a lovely teacher. She read us some lovely stories and sometimes we made figures with plasticine relating to the stories. Miss Hawkes taught the 3rd class and she was very strict and always dressed in black. One day each week we would listen to the radio where the speaker was Miss Ann Driver who gave us music and movement exercises to do, which we all enjoyed.

Each day pupils had a small bottle of milk (1/3 pint) that was drunk with a straw. For those pupils who stayed at school during lunch time, red and white check cloths were placed on the desks, then enamel plates were taken from the cupboard, these were provided for the children who had brought sandwiches. Prior to lunchtime, we sang: