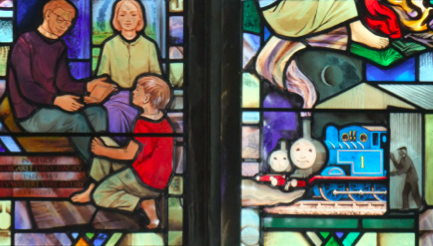 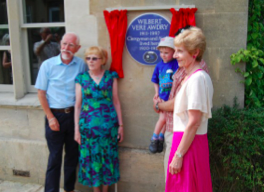 The Awdry family at the unveiling of the commemorative plaque to W. V. Awdy at Lorne House, Box.

On Saturday August 11th 2012, in the presence of his sisters Veronica and Hilary and their children, Christopher Awdry unveiled a commemorative plaque to his father, the clergyman and writer the Rev. Wilbert Vere Awdry, at Lorne House, Box. Wilbert Awdry had lived at Lorne House, named ‘Journey’s End’ by his father, the Rev. Vere Awdry, from 1920 until 1928. This delightful memorial to Wilbert shows ‘Thomas the Tank Engine’, one of the many engines he created while writing his 26 books for children.

Wilbert Vere Awdry was born on 15th June 1911, at Ampfield Vicarage, near Romsey, Hampshire, to Vere and Lucy Awdry. Vere Awdry was one of 14 children of Sir John Awdry of Notton House, Lacock and though he commenced work as a solicitor he trained at Chichester Theological College and was ordained in 1886. In 1887 he married his first wife, Margaret Mann, while serving as a Curate at North Bradley but tragedy struck the following year when Margaret died while giving birth to Hildred, who later died in 1891 of convulsions. Vere then married Mary Mann, cousin of Margaret and in 1892 Bridget was born, followed by Carol Edward in 1894.

In 1895, the family moved to Ampfield where Vere had been offered a living. He was a popular incumbent and was much concerned, among other things, with the welfare of children in the parish. Two further tragedies struck the Awdry family when 8-year-old Bridget died of appendicitis in 1900 and in 1908, Mary, her mother, died of cancer. Carol Edward was then 14 and he and his father grew very close together. Vere was understandably grief stricken and withdrew from any parish activities. His niece, Edith Simeon, came to the Awdry home as housekeeper and during this time a close friend of hers, Lucy Bury, daughter of a Darjeeling tea planter, often visited the Vicarage and she got on well with Vere. They married in 1909.

Much happier with his family situation, Vere picked up his many activities and Wilbert was born in June 1911. Brian Sibley, in his biography on Wilbert, describes where his name came from, “It was by combining the names of William and Herbert, Vere’s favourite brothers, that he got the name “Wilbert”, with which he later christened his son”. 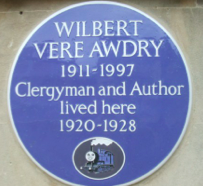 The plaque at Lorne House in Box

Wilbert became very close to his half-brother Carol who, on the outbreak of War in August 1914, enlisted as an officer but just 13 days later, on 27th August, he was killed in action during the retreat from Mons. Despite the birth of a brother for Wilbert, George, in 1916, Vere found the memories of Carol at Ampfield too difficult, so he decided to retire and return to his native Wiltshire. The Awdry family came to Box in 1917 having for a short time lived at Middlewick, Corsham, when Vere served as Chaplain to the Hartham Estate chapel.

Their first house in Box was ‘The Wilderness’, then in February 1919 they moved to ‘Townend’ and finally to ‘Lorne Villa’ in 1920, which they renamed as ‘Journey’s End’.

This house was journey’s end for Vere as 8 years later he died there. For young Wilbert, ‘Journey’s End’ was only 200 yards from the road bridge of the A4 crossing the Great Western’s London to Bristol route which emerged from Box Tunnel with a great flourish. In those days a banking engine was retained at Box to bank all the heavy freight trains through the tunnel and Wilbert, George and their father, Vere, took great interest in all the railway activities so close to their home. Vere Awdry was indeed a photographer of railway engines and I have some copies of his pictures taken in the 1920s taken in and around Box Station and Box Wharf, by the tunnel. The sound of the trains being banked through the valley at Box and the rushing of the express trains from the tunnel must have inspired Wilbert to think about railways when his son Christopher later requested a bedtime story. 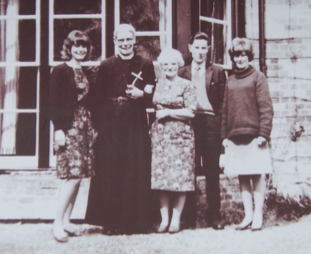 In the meantime Wilbert was educated at Dauntsey’s School, West Lavington, St. Peter’s Hall, Oxford and Wycliffe Hall, Oxford, where he gained his diploma in theology in 1933. For three years he taught at St. George’s School, Jerusalem and was ordained in the Anglican priesthood in 1936. In 1938 he married Margaret Wale. In 1940 he became curate at St. Nicholas Church, King’s Norton, Birmingham and stayed there throughout the war until 1946. He subsequently served as Rector of Elsworth with Knapwell in Cambridgeshire and as Vicar of Emneth, Norfolk, before retiring and moving to Rodborough, Stroud, where he lived until his death in 1997.

A fine memorial stained glass window by Alfred Fisher (1998) is to be found in the Parish Church of St. Mary Magdalene, Rodborough. This window was commissioned and donated to the Church by Wilbert Awdry. Veronica Chambers, Wilbert’s daughter, has kindly passed on to me the notes made by Alfred Fisher regarding this window. He says, “the left side base picture is “a depiction of the family at the time the stories were written, a stylised rendering rather than the exact portraits. The fact that Wilbert is seen with an open book is entirely symbolic, a way of introducing the books without which the window would be incomplete”.

At the base of the right hand side is the cameo of Thomas. “Thomas is seen being put in the shed for the last time while a shadowy figure of a clergyman in a cloth cap starts to close the door. Thomas has a mixed expression of sadness on the one hand and pleasure at what has gone before. The moon above confirms that this is the end of the day, the end of an era”. Alfred Fisher also designed and made the plaque at Lorne House in Box.

Part of the memorial window at St Mary Magdelene, Rodborough with Thomas the tank engine at bottom right.

In 1943 young Christopher Awdry had a bout of measles and to amuse him and satisfy his thirst for stories Wilbert embarked on the first of his railway stories about Edward, Gordon and Henry, with Thomas appearing a little later. In the 26 books that Wilbert created in his lifetime many engines of all shapes and sizes appear. One of my favourite books is that entitled ‘Small Railway Engines’ and in the chapter called ‘Tit for Tat’ we meet the two clergyman, the Fat one and the Thin one. When looking at the illustrations for that chapter it’s easy to identify the Thin Clergyman as Wilbert himself, while the Fat Clergyman is based on the Rev. Teddy Boston, a dedicated steam enthusiast, who lived at Cadeby Rectory, Leicestershire. I had the great pleasure of knowing both Teddy and Wilbert quite well and I can imagine having the two of them together would have been one of the funniest events ever, as they were both such great storytellers.

When you next pass ‘Lorne House’ in Box, do stop and view the lovely plaque that the current owners of this bed and breakfast establishment, Fran & Mike Ralli, have inset on the wall. I am indeed grateful to them for their kind invitation to attend of unveiling ceremony back in August and to members of the Awdry family, Veronica Chambers, Hilary Fortman and their brother Christopher, for allowing me access to material used in connection with this article.