Inside the Corsham Cellars 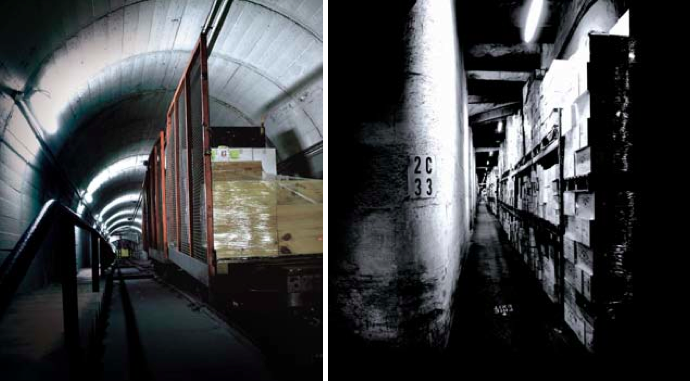 Photos courtesy of the Corsham Cellars

This is a wonderful tale of the conversion of the metaphorical swords into ploughshares. The site has been variously known as Eastlays, Pictor Monks, Eastern Monks and CAD sub depot 2.

The Pictors began quarrying the site in 1837. It was then called Pictor Monks Quarry and produced very good building and carving stone; the quarrymen earned a higher rate of pay than at some of the neighbouring mines. This was transported by tramway up the incline, across Park Lane to the east side of Rough Street, where it was gravity driven to the Corsham sidings. The stone was sent as far afield as Capetown and Saffron Walden.

Sometime in 1934 quarrying finished and purchasing of the site by the War Office began in 1936, and completed in 1937 by Compulsory Purchase from the Monks Park Estate (by using the Defence of the Realm Act, possibly for the first time in such circumstances). It was to be called the Central Arms Depot sub depot 2.

When the Royal Engineers first surveyed the quarry in 1934 in no way could they have thought that not only was this site ideal for the storage of munitions, but that its ultimate use would be for the storage of fine wines. For this site is huge, approximately one million square feet, bomb proof (some 100 feet below ground), therefore also vibration proof, with constant temperature and humidity – what suits explosives suits wine.

As there was only one slope shaft, two more access shafts were sunk. As clearance progressed it was found that the pillars had been badly “robbed” and needed replacing or “corsetting”. The roof was naturally badly faulted and also required reinforcing. The eastern reaches were abandoned owing to the wet conditions. In conjunction with this work land at Beanacre Halt was cleared for the necessary railway sidings.

During the clearance two men were killed in a roof fall, by this time many of the men were from the collieries, but following this accident it was thought advisable to leave the quarrymen to do the roof inspections.

As there was no area in which to “backfill”, all the spoil was deposited on the western and southern boundaries; because of these extensive surface workings it would have been impossible to camouflage it from the air. A decoy “Q” site was proposed to protect Thingly Junction (and by implication Eastlays); the site chosen was at Queensfield (Lacock) along the line of the old canal; but I have no information as to whether it was ever used.

Air conditioning was installed in 1939 and in 1940 the site became fully operational for the RAF and Royal Army Ordnance Corps. By 1944 it was holding some 45,000 tons of explosive.

In May 1944 three trucks, loaded with 500lb bombs, broke away in a slope shaft, in the process breaking through the blast doors, before scattering their loads. Incredibly, nobody appears to have been injured but one can imagine the feelings of those down below.

A very detailed history of these momentous times can be found in “Secret Underground Cities” by N.J.McCamley.

After the war the site was slowly run down until it was “mothballed” in 1962. In 1972 the site was advertised for sale and purchased by EMF Farming Associates; and this, at least, ensured that it was reasonably secure from vandalism.

An eclectic mix of rumours and proposals arose as to the eventual use, including mushroom farming, storage of Avon tyres, production of flares, storage of wine and butter.

In 1981, seemingly out of the blue, appeared Rusepalm Developments, the UK arm of Douvaine Investments, a Jersey registered company. Doom City had arrived with the slogan “stump up 2,000 quid and you will be saved from the universal rotisserie”. The chairman of Rusepalm was Maureen Whittart, a woman of such Walkyric demeanour that she terrified the BBC reporter who went down into the mine with her; likewise, judging from his speech in the Commons, our local M.P. Richard Needham (Hansard 11.05.91)

The proposal was to accommodate 10,000 people in luxuriously-equipped family units, and space for 3,000 cars if NEATLY parked. The Parish Council circumvented these proposals by rejecting them on planning grounds. On the other hand the Highways department was quite happy – one can only presume that the thought of 3,000 cars in one place was a jolly good idea.

Eventually the caravan slunk away, with their legal advisor Nicholas Fior being struck off by the Law Society, and it is alleged, leaving unpaid bills at the Harp and Crown, but taking the deposits of those who dreamed of a post- holocaust world. Then Collingwood International proposed an above ground conference centre and exhibition hall with below ground testing rooms for civil protection and safety equipment.

The site has been used as a filming location (in addition to the MOD archive) of which we have the names of the following: Fourth Arm BBC TV Series 1983 and Blakes Seven BBC TV Series 1978.

This former Bathstone mine was acquired by Cert Octavian in 1989 and has been developed into the world’s leading fine wine storage facility. This vast deep site, of some 30 acres, provides the ideal conditions of no natural light or vibration. The environment has been enhanced by a computer system that ensures a stable environment of 13-14 °C with a humidity between 75-80%. To avoid stale air there is a remarkable ventilation system requiring 9 foot propellers that drive fresh air into every corner of the facility through miles of ducting.

Around 85 people are employed on the site of whom 35 descend the 157 steps on a daily basis to attend to the 700,000 cases of fine wine. In addition to around 200 trade customers there are just over 2,000 private customers storing anything from a single bottle to thousands of cases in their individual portfolios. The oldest bottle laid down is a 1791 Château Lafite-Rothschild.

What a remarkable history for this site and what a wonderful completion.

March 1898 “Mr. G. Ward (Linen Draper) of the High Street was going through Rough Street, on his bicycle, and in crossing the tram line a trolley laden with stone passed across the road and Mr. Ward was thrown violently from his machine. Medical assistance was telegraphed for to Bath. Mr. Ward is in a precarious state”. But we Corshamites are made of stern stuff as he was still trading in 1903!

I have added some details about these other two sites as it helps to explain the drainage problems of the eastern fringes and rounds off the details of the area.

This is a very small mine to the east of Eastlays with one slope shaft. It has been suggested that part of the mine’s function was to relieve extraction pressure on Eastlays. The shaft is stone lined and very well preserved but it is subject to continual flooding and although the stone is of good quality very little could have been extracted. The owner must have had high hopes for the mine as the facilities for banker masons and the engine house for the winding gear still exist and are well built.

Immediately to the south of the Goodes Hill mine is a reservoir. As this is lying on greensand it most likely accounts for the flooding of the mine. The reservoir, built in 1988, is served by two bore holes, only the second, sunk in 1942, is active; formerly there was a water tower, which was taken down and moved to Chapmanslade. This bore hole has a depth of nearly 61 metres and a diameter of 250 mm, giving a capacity of 2.5 Ml per day – no wonder it is wet down there!