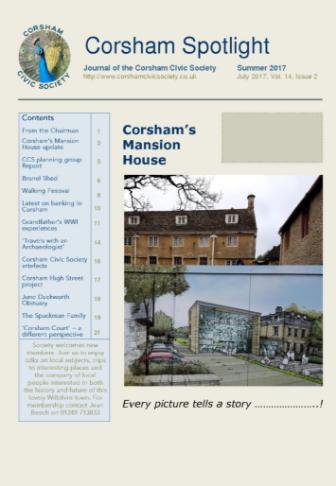 The photograph here is a clear indication of what was considered most important by Wiltshire Council and their architect’s, DKA ~ far more prominence is given to the new extension which predominates rather than to the fine Georgian building! The mock up is typically representative of an architect’s ‘vanity project’.
On 21stDecember [only just in time for Christmas!], a Corsham Town Council (Planning) meeting considered the original applications [planning application and Listed Building Consent application, hereafter LBC] by Wiltshire Council, noted a 70-signature petition against aspects of the proposal, listened to objections and then:
Resolved:

* Setting: The National Planning Policy Framework 2012 makes it clear that the setting of a heritage asset is the surroundings in which a heritage asset is experienced. Setting in urban areas …… is intimately linked to considerations of townscape and urban design and of the character and appearance of conservation areas.

Wiltshire Council then made some minor changes but did not address the key issues (ie of the setting of the listed building and relocation of the extension) that CTC Council (Planning) meeting had referred to in its resolution, and submitted that as a ‘revised’ application. On 15th March the CTC Council (Planning) meeting met to consider that application, again listened to objectors and …
Resolved ~ Not to object to this scheme but to ask that the Town Council’s previous objections and suggestions continue to be considered as the proposal moves forward. Also that an archaeological watching brief be put in place on any geotechnical/ground investigation test pits.
This resolution was weaker than the original (with the exception of addition of concerns about archaeological potential ~ more details about that in the next issue) since it was felt that Corsham Town Council had already raised key issues but that Wiltshire Council were not prepared to further consider them [it should be noted that the Town Council can only make recommendations to Wiltshire Council which is the planning authority]. Also, it should be noted that the above resolution did not constitute approval by CTC as was erroneously asserted by a councillor. The revised proposal was then considered to the Wiltshire Strategic Planning Committee which met on 24th May: beforehand three Corsham residents who were acquainted with all the objections, the petition etc., and have specialist knowledge of the issues, circulated a detailed report to all the committee members.
The report actually asked for the Committee to consider (as required by the NPPF) whether there was an alternative scheme which might deliver the economic benefits and therefore delay decision-making on the current scheme until a worked-up feasibility proposal was put to the committee. Also, Neville Farmer, of Corsham addressed the committee, [his paper is included at the end of this article].

Most unfortunately, it was all to no avail: the key points raised, in particular, the listed building setting, the possibility of locating the proposed extension to the back of the Mansion House (something that neither the Georgian Group nor the Ancient Monuments Society would have objected to in principle) and the lack of any archaeological provision, were not discussed at all by the committee. Indeed, with one honourable exception, the ‘discussion’ was brief and mainly banal and focused very largely on the possibility of losing the funding [no reason given] and needing to get the development under way as soon as possible. By 7 to 3, the planning application was granted as was the LBC which now rests with the SoSfor consideration as the Georgian Group and the Ancient Monuments Society maintained their objections.
On a personal note, I have to observe that I have attended many planning meetings in my nearly 40 years’ involvement with archaeology, listed buildings and Conservation Areas, and I found the presentation of the proposal and the ‘discussion’ very disappointing for such an important matter. Indeed, as was remarked to me by a senior and very experienced professional:
There was a rather poor and colourless presentation from a rather flustered Case Officer –though that would be to accord it a dignity it didn’t deserve (save for the heroic intervention of one Committee member who obviously had read the paper prepared by the objectors, the outcome was very, very disappointing but, sadly, not unexpected. What particularly struck me is that one of those who spoke to the meeting didn’t address the key issues and yet on recent occasions had appeared to be more concerned about the cladding of the frontage of a restaurant in Corsham than that of much more substantive issues concerning one of its most prominent 18th century listed buildings.
In summary, Wiltshire Council’s high-handed and underhanded approach to meaningful consultation resulted in the public being presented with a proposal which was from the start a fait-accompli.
Inevitably, that decision has already attracted quite some criticism and, indeed, caused Piloti (an eminent architectural historian) in Private Eye to deplore it.
Just as we went to press, the Secretary of State announced that Listed Building Consent had been granted, subject to [standard] conditions, which is disappointing but not surprising. That will be reported on fully in the next issue together with other aspects of Mansion House -including the archaeological matters -and the wider issues.
John Maloney
Councillors,
I should state first of all that although I am a Corsham Town Councillor, I am speaking as a resident, who lives just three minutes walk from the Mansion House on Pickwick Road.
For some years now, we’ve seen the flashy hoardings outside the site, with computer images and plans of the bold redevelopment. They were controversial. Many people didn’t like the large glass and stone cube of the extension. Others found it exciting, but at least we understood our town council had a voice on the consultation committee. Just now we were told that you haven’t one either.
We understood from what we read on the hoardings that this was to be a community project, working with the Corsham Institute at Hartham Park and Bath Spa University, and utilising Corsham’s unique access to superfast datalinks. It would be an exciting, progressive place in which small digital businesses would incubate and flourish, in which art would be displayed, in which learning could take place and in which the residents could rightly feel some pride.
When the consultative committee met over a year ago, that still seemed to be the case. Then we began to hear rumours that the Corsham Institute and Bath Spa were pulling out due to conflict with the council planners and fears that the project was being watered down. We didn’t hear anything more from the planning department and, I understand, neither did our representatives from Corsham TC until early this year.
Watered down doesn’t come close to describing this tawdry excuse for a plan. Gone is the educational element, gone is the community connection – unless you consider a small meeting space for about 40 people and a poorly designer glass foyer for hanging a few paintings.
What is left is a series of small business units and that’s it. The only apparent link to digital Corsham is that digital companies will be encouraged and it’ll have wi-fi. The controversial glass cube has been reduced to a box of questionable architectural value containing more small business units. It is ugly, dull and visionless.
Effectively, the planning department and county have offered Corsham a fait accompli. Either accept this or we’ll let your precious Mansion House collapse. I know it’s your building, but I notice there’s no-one on this committee from Corsham. For those of us who live there, it is our Mansion House and we want it restored, but with vision.
After you’ve spent all that money on fancy plans, all you have left is this?
People in Corsham are furious about this. I was one of those who signed the petition against this plan and that is why I’m here now. Personally, I’d prefer you just refurbish the mansion as it should be, include the business units but not the cube, and then start again to find funding to give Corsham what it needs: something bold, visionary and positive for the community. This is not it and I think you should be ashamed of yourself for hiding it until it was too late for us to do anything more than express our dismay.
Thank you.
Neville Farmer