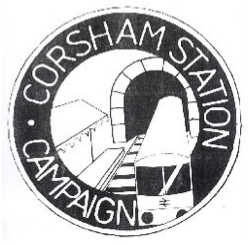 As from April 2015 all decisions on major transport scheme funding will be devolved to Local Transport Boards. However, since March 2013 these Transport Boards, a key part of Local Enterprise Partnerships, have become responsible for prioritising major scheme funding, based on studies of eligibility and value-for-money criteria. Through a process of sustainability checks, 10 schemes out of a possible 70, four of which were rail projects, emerged for inclusion within the Local Growth Fund of the Swindon and Wiltshire Strategic Economic Plan Priorities List to 2021 – one of which is Corsham Station reopening. Both Kevin Gaskin (on behalf of our Community Area Partnership) and I for the Campaign submitted statements in support of the Corsham reopening to the first meeting of the Swindon & Wiltshire Local Enterprise Partnership (SWLEP).

As you will know from previous updates, due to my attendance at quarterly Public Transport Forums across the Bristol–Bath area since the late eighties, Corsham Station is included within their planned MetroWest bid Phases 1 and 2. Cross-boundary cooperation on the part of the Swindon and Wiltshire Local Enterprise Partnership and Wiltshire Council will be required, of course, to bring the scheme forward within the electrification programme presently being undertaken by Network Rail (NR). Councillor Horace Prickett, the new Portfolio Holder for Public Transport, is mindful of the need for NR engineers to take account of both Corsham Station and the provision of a local rail service when planning the positioning of their electrification gantries in this area.

On Tuesday 28 October I caught an early train to London, to be certain of arriving in good time for the meeting Wiltshire had arranged with Rachel Brown, Local Authorities Schemes Manager for the South West, at the Department for Transport. Recently in post, I was struck by her positive attitude, so very different to that displayed by her predecessor. Rachel’s suggestion towards the end of the hour’s meeting was that there should be another meeting, more technical in nature, towards the end of January 2015.* At this point Wiltshire Council’s political ambitions for the Chippenham Constituency came to the fore – rather than appointing his colleague, Councillor Prickett, who has knowledge of the industry, Councillor Dick Tonge informed Rachel Brown that the bid team would be led by their prospective parliamentary candidate for the constituency, Michelle Donelan.

In December 2013 the Government announced funding for an East–West rail link between Oxford and Cambridge, linking both cities to each other and London – the ‘High-TechTriangle’, as it is dubbed. The icing on the cake for us would obviously be the return of the Bristol–Oxford service so that we, as part of the overall Bristol economic area, can have direct rail access to any part of that IT hub. There is a petition, and our MP, Duncan Hames, has drawn together a cross-party group of ten MPs with constituencies along the route to impress on the Secretary of State, Patrick McLoughlin, the benefits such a rail service could deliver to the economy of the areas through which it passes. Last July Passenger Transport Executive Group (PTEG) published a Report entitled The Economic Value of Rail in the North, which includes their finding that a £1 investment in rail delivers more than £4 in economic benefits. It also of course contributes to more healthy lifestyles: just think, a half-mile walk each morning, rather than three steps to the car, could help to decrease the number of folk in GP waiting rooms!

* Network Rail, as Infrastructure Managers, need to ensure that schemes are compatible and integrate with existing railway operations. To do this, schemes proceed through the Governance for Railway Investment Projects (GRIP) process, which is divided into eight distinct stages: 1) Output definition; 2) Feasibility; 3) Option selection; 4) Single Option Development; 5) Detailed design; 6) Construction test and commission; 7) Scheme hand-back; 8) Project close out. Obviously, the further any scheme proceeds through this process the more likely is a successful conclusion to be reached.