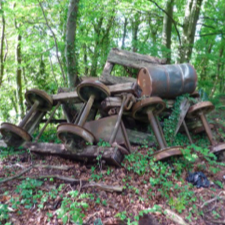 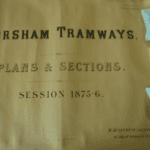 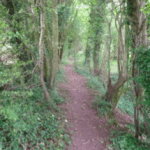 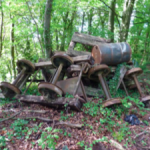 Much has been written about Corsham’s stone quarries and their subsequent role in WWI and WWII, for example in excellent books such as Derek Hawkin’s “Bath Stone Quarries” and in Nick McCamley’s “Secret Underground Cities” and “Second World War Secret Bunkers”. There has even been a video history of Bath Stone quarrying called “Deep and Dusty”. Less research, however, has been carried out on the relatively extensive quarry tramway system that linked six local quarries (Park Lane, Eastlays, Monks Park, Ridge, Spring and Hudswell) with the Great Western Railway near to the site of Corsham Station.

The system was initially authorised by the Board of Trade in 1876, used a gauge of 2ft 51/2 inches, and eventually consisted of five branch lines. Although small diesels were sometimes used in later years in the quarries and their yards, the tramway links down to the stone yards on the Great Western Railway were usually worked by horse and gravity. By the Second World War the tramway had largely fallen into disuse and much of the track was lifted in the 1940s.

Some documentary and photographic evidence still exists. The Wiltshire and Swindon History Centre in Chippenham holds copies of the original Board of Trade Orders and plans and sections and has Ordnance Survey Maps for 1891,1901 and 1921 which allow us to see the exact routes of the tramway and its evolution. There is also a reasonable catalogue of photographs showing the tramway sidings operating in quarry yards and at its terminus down on the GWR, but photographs of the tramway and trolleys operating between these locations are much rarer. Sadly, having

personally walked virtually the entire network in recent years, it is evident that very little physical evidence remains out on the ground apart from one or two embankments, a rare and isolated piece of rail and some decaying tramway trolleys at Monks Park Quarry (and even these may have never been used out on the tramway system but only for bringing stone up from underground). In most places it is almost impossible to work out that any tramway existed at all.

It is my intention to collate any remaining evidence before it is finally lost and ultimately I hope to produce a booklet on the subject. I am particularly keen to discover any photographs of the tramway operating between the quarries and the main line railway because one of the themes of the booklet will be to use “then” and “now” photographs so that people can go and explore the accessible remains of the tramway system for themselves. I have already received invaluable information from local quarry historian David Pollard, and Geoff Knapp who lived next to the tramway at Great Lypiatt Farm, but if anyone else has any knowledge or photographs of the tramway system do please give me a call on 01249 712248 or email me at phil@thewhalleys1.plus.com

PS. A separate thought. Wouldn’t it be wonderful if one of the abandoned stone trolleys at Monks Park Quarry could be restored and then placed in front of the proposed Corsham Community Centre loaded with large blocks of locally quarried stone? This would make an impressive feature and also provide a reminder of the importance of the quarries in our town’s history. Now that three quarries have re-opened it might even presage the future.