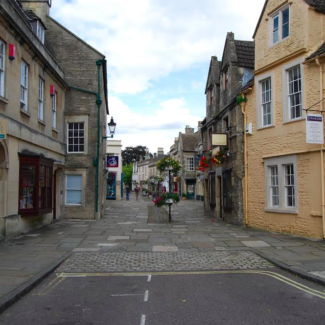 In the last issue it was reported that the Wiltshire Building Record [WBR] were intending to embark on an in depth survey of some of the houses in Corsham High Street, with a view to identifying their origins and usage throughout the ages.
Representatives of Corsham Civic Society [the society] met with WBR in September and their chair, Gerald Steer, proposed that the society lead the project and that WBR would provide as much help and guidance as possible, to bring the project to a satisfactory conclusion. On behalf of the society, I said that I thought the society would accept the challenge but the proposal would first need to be discussed by its executive committee. I also stated that any such involvement would need to be on the basis of no financial risk to the society. Given that the above points were formally agreed, it was proposed that one of the first steps would be to advertise for volunteers on the society website, in the Spotlight magazine and through other media.  WBR will also put forward some suggestions of likely candidates who may be interested eg those who took part in the recent Lacock Archive project, including a number of society members [Pat Whalley has agreed to co-ordinate volunteers].
I am pleased to be able to report that the society’s Chairman has confirmed the key points are agreed and so a start can now make be made on the project. Also, I’m pleased to report that Julian Orbach [editor, for the revised The Buildings of England, Wiltshire volume] has kindly agreed to be Hon. Chair saying, “Thank you for the offer and it would be an honour to accept ….” Concerning making a start, many thanks to Peter Tapscott for arranging the passing of £2500 from the former Corsham Area Heritage to the society for the CHSP.  Amongst the first steps envisaged are ~