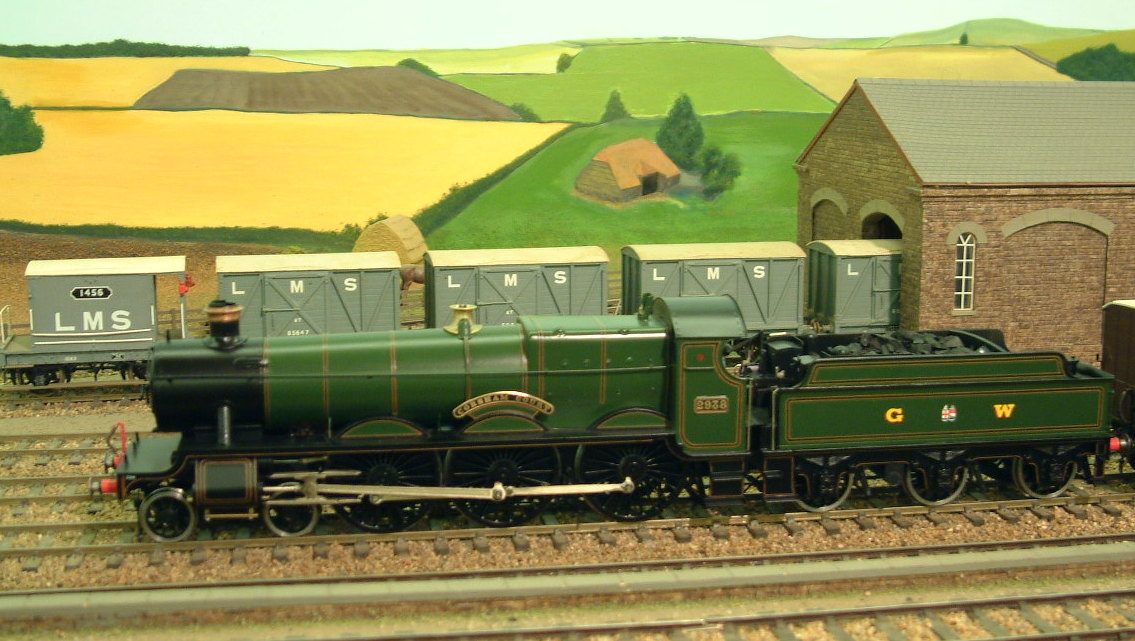 Between 1906 and April 1913 a total of 75 ‘Saint’ class 4-6-0 express engines were built at the Great Western Railway’s Swindon works to the design of George Jackson Churchward, the Chief Mechanical Engineer. Though the class was called the ‘Saints’, only 20 of the engines were named after Saints, the first being Saint Agatha, the last being Saint Vincent. Other engines were named after ‘Ladies’ – eg. ‘Lady of Shalott’, 25 were named after ‘Courts’, the remaining engines took names from Sir Walter Scott’s novels and famous personages connected with the GWR eg. Sir Ernest Palmer, of ‘Huntley & Palmer’ fame who was Chairman of the company at one time.
In amongst the 25 ‘Courts’ we find engine number 2938 ‘Corsham Court’, which was built in December 1911 and was sent to Goodwick in South Wales where it ran for many years. Its final shed, before withdrawal in August 1952, was Gloucester and in its 40 years of service it ran a total of 1,704,165 miles. Photographs of 2938 ‘Corsham Court’ in service are very difficult to find, but one of our members, Maurice Dorney, has managed to unearth an excellent shot of the engine taken sometime after 1948, but we are not quite sure of the station location. Another photograph that Maurice lent to me shows the engine in a slightly dirty state as this was taken in August 1952 by E.W. Fry after the engine was withdrawn from service.

The last of the ‘Saint’ class to be in service was 2920 ‘Saint David’ which was withdrawn in October 1953 with 2,076,299 miles on the clock. It was hoped that this engine would be preserved, but its main frame was badly cracked, so it was cut up at Swindon Works having given a noble 46 years’ service.
The colour photograph shows how the engine would have looked in the 1930’s in full lined GWR colour with a copper capped chimney. This is a 7mm model constructed by my friend Ken Payne for my 60th birthday.
I would like to thank Maurice Dorney for bringing his photographs to my attention and it’s interesting that engine number 2940 was named ‘Dorney Court’.
Michael Rumsey