A glimpse into the history of the Methuen Arms 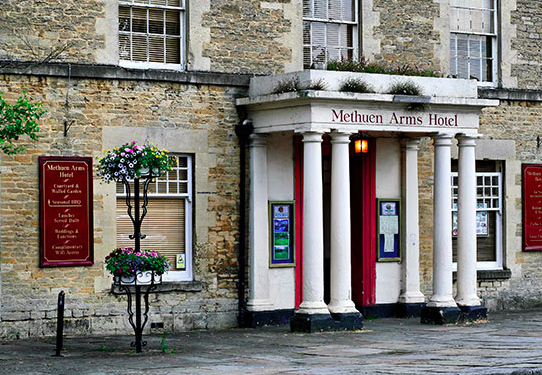 A glimpse into the past history of this building may not be known to many, particularly those new to our area, so bear with us if you have heard the story before!

In Tudor times this was the site of an impressive house, known as Winters Court, and in 1463 it was owned by the ‘Nott family’, he was a Bailiff of Corsham. It became a public house in 1608, and was established as the Red Lion Inn. At some time the proprietor was one Christopher Knott. He was probably a descendant of the original family, but if so he was perhaps not as stalwart a being as his predecessors, for he was renowned for “illegally selling ale to all and sundry, and encouraging drunkenness.” On other occasions he was acquitted of fighting a customer – John Coryn of Wraxall, but was fined 9d for injuring Thomas Little.  In 1613 he was arrested for playing cards on the Sabbath, and later, for selling spiced bread with Widow Keynes – this lady was described as a ‘night walker’.

There is an ancient ‘chequers sign’ visible on the doorway on the Lacock Rd side of the building. This is believed to be a sign of Roman origin that may have referred to a game, similar to draughts, which was played on the premises. But the sign was later associated with a money table, and could have been used at Inns, to show they were willing to ‘exchange money’ (Exchequer originally meant a kind of chessboard).

Edward Nott bequeathed the building to his sister Elizabeth Webber in 1732, who in turn left it to her daughter Christian. There is apparently a record of possible alterations to the building high up on the old wing that borders Lacock Rd. Here is carved the initials “N.N.  I.N. 1650”, and  “CW 1749”.  The ‘N’ would stand for Nott, and the CW would be appropriate to the Webber family. It was in 1799 that Christian died, and the ownership passed into the Methuen family, the building was then renamed ‘The Methuen Arms’.  In Victorian times, it was a Coaching Inn with stabling for 40 horses.

In living memory we know that the Duke of Edinburgh played skittles and darts at the ‘Methuen’, with the locals and his compatriots from the Royal Arthur Petty Officer Training School in Westwells. He was also ‘courting ‘ Princess Elizabeth at this time, and is known to have asked his Commanding Officer for leave to go to London so that he could propose!