50 years of playing the organ, by Michael Rumsey 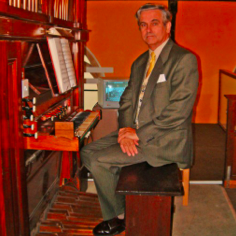 Michael Rumsey at the organ

On Sunday November 18th 2012, at the Box Methodist Church, I celebrated my 50th anniversary of playing the organ for Church services and other events. Please don’t ask me how many hymns I may have played during the last 50 years, I have no idea, but I’m sure it runs into many thousands. It all started off when I was 13 years old and placed on the organ seat at the Methodist Church on Box Hill, which is situated just a few yards from the Quarryman’s Arms. My instructions from my father were as follows: ‘Well son, you’ve been learning the piano for 5 years, now try the organ, we need an organist for the Sunday School in 4 weeks time as Margaret Ettles is leaving to get married’. For the next 4 weeks I spent hours mastering the two manuals of the organ not really sure if I was getting the right sound. I chose 2 hymns from the Methodist Sunday School hymn book, numbers 607 and 608 and prayed I wouldn’t make any mistakes. I was extremely nervous that first Sunday I played. I’m sure there were far more wrong notes than correct ones and I certainly didn’t touch the foot pedals.

As the weeks passed, my range of hymns to play increased and for the next 5 years I played on a Sunday morning. In 1962, Mrs Ellen Head, who had been the organist for the Sunday evening services for many years, decided to retire and I took over and for the next 5 years, until the Church closed on November 12th 1967, I played for every evening service and special occasion. The organ was a most interesting instrument. The brass plate, above the keyboard, stated it was built by ‘Flight & Robson, Organ Makers to His Majesty’. We all supposed that it was built during the reign of either George IV or William IV, looking at the design and layout. Sweetlands of Bath tuned it once a year and it was a delight to play having a lovely swell box, but a short straight pedal board which could be annoying at times, that’s when you ran out of notes to play on the lower or upper registers of a normal pedal range. The organ itself had arrived in 1914 from a large house in Bath and the whole pedal board could be disconnected and pushed in flush to the casework. The organ was electrically blown, though, if the electric failed, as it did more than once in thunderstorms, an air supply could be created by hand pumping a lever at the back of the casework.

In November 1967, the Box Hill and Kingsdown Methodist Churches closed down and were later sold and the congregations transferred to the larger Church in Box which is situated by the main A4 as you pass through the village. The Box Hill organ was sold to an organ builder in South Wales. He created a new organ which was erected at Holy Trinity Parish Church, Calne. Unfortunately, vandals broke into the Church one night and destroyed the organ by lighting a fire beneath it. Other ranks of the Box Hill pipes ended up in a rebuilt organ at Oswestry Methodist Church, Shropshire. 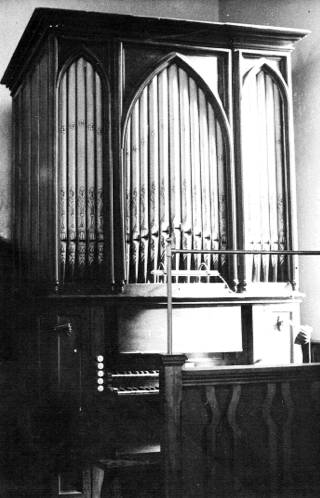 The only known photograph of the Box Hill organ

The Box organ is a single manual instrument with, originally, 7 stops. It is thought to have been built in the 1850s and has a fine mahogany case with just over 400 pipes. Both the keyboard and the original straight pedal board were on rollers so they could be pushed back flush to the casework. In 1986 the organ was rebuilt with an extra stop being installed and a full 32 note concave pedal board with electric action being fitted, leaving the rest of the organ’s action as tracker.

This rebuilding was funded by the Frederick G. Neate Organ Bequest, originally given to the Box Hill Church but passed to the Box Church on the amalgamation in 1967. In 2002 the organ was dismantled and taken piece by piece and rebuilt in the organ gallery newly created at the back of the Church. I remember helping to carry all 415 pipes, sides, blower mechanism etc, but the bellows, keyboard and main part of the works, weighing some 7 cwt, was hauled up a set of sloping ladders until being finally placed on its new cushioned base in the gallery where it is to be found today. Once the pipes were back in, the whole organ needed tuning ready for the first Sunday service in October 2002. 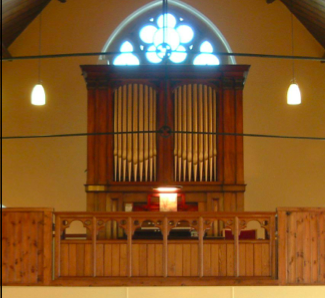 I have no regrets in learning to play the organ, it’s certainly the ‘King of Instruments’ in my book. I look forward to playing for a good number of years until my successor is found. Then I can sit back and listen to someone else’s playing.

Anyone wishing to try the Box Methodist Church organ should first contact me on 01249 715741 or at michael.rumsey@btinternet.com