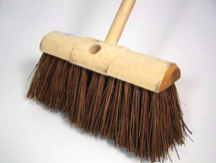 We have many small industrial units in Corsham producing many different products but probably none operating for as long as 150 years, as was the Neale & Gough Brushworks in Pickwick Rd. No evidence has been found to link these names to Robert Neale, the clothier of Corsham, or to the family of Goughs Solicitors.

The story begins in Bath, with a man named John Horsey, who was making brushes in the Manvers Street area in 1811, and having prospered decided to transfer his business to Corsham. He first moved to Meadlands, Pickwick, where he built the workshops and commenced manufacture. The family settled in well and became part of the congregation at Priory Street Baptist Church. All was going well, until one day when the bass (from which brooms are made) was boiling merrily away and a great deal of smoke was issuing from the fire. Unfortunately, Mr Thomas Poynder of Hartham House happened along on his horse and the smoke caused the horse to shy, alarming its rider, who promptly decided to get rid of this problem and gave Mr Horsey, his tenant, notice to quit his premises.

Not to be dismayed, Mr Horsey quickly found alternative premises in Pickwick Rd, where he was able to purchase two cottages with a lengthy garden at the rear, in which he could re-establish his business.

John Horsey and his wife Hannah had three sons: twins Ralph and John and Peter and a daughter, Selina. Father and sons worked well together until the death of the father in about 1860 and although business was good, it was decided that it could not sustain three proprietors. So John sold his share of the business to his two brothers and took himself off to Frome, where he established a separate brush-making business.

In due course the daughter, Selina, married William Neale and on the death of brother Peter, William became a partner with Ralph. Following the death of Ralph, William became the sole owner. Unfortunately, William was to die at the age of 45, in 1880, and it was left to Selina to carry on the firm and care for three daughters: Selina Horsey Neale, Esther, and Louisa.

The 1881 census records that Selina, widowed, was head of the household and running the brushworks, employing 5 men and 3 boys. She lived with Esther, aged 19, Louisa aged 17, and Hannah, her mother, who was then aged 90 and who died later that year. Daughter Selina was a governess in Bath at this time.

By 1891 daughter Selina had returned home and was acting as clerk, Louisa was the housekeeper and Henry Gough was Manager. Esther had married in 1884. Louisa and Henry married in 1892. Selina senior died in 1894, leaving the business to her two daughters, Selina and Louisa, who, with the help of Henry Gough, continued to run a favourable business. In 1900 they replaced the workshop with a two-storeyed brick building, which survived only until 1920 when it was destroyed by fire. Undeterred, a new building was erected and business continued apace.

When Henry Gough died in 1938, his son Alan was able to take over and managed the business with the unmarried Selina until she sold out her share to him in 1954. She died in 1957 at the age of 98. The business was still thriving in 1961. (Can anyone tell us what year it finally closed?)

Fire and heat seem to play a serious part in this story, but since we do not know what types of brush/brooms were being manufactured it is difficult to be quite sure what was happening. Brushes at this time were made of many things such as birch twigs, hog bristles, camel/squirrel hair, cocoa-nut, palm fibres. It was a mixture of plant fibres which made up the ̳bass broom‘, which apparently was the cause of the smoke screen over Pickwick and upset Mr Poynder. Bristles could also be bound and dipped in melted pitch. The firm installed gas-powered engines in 1920. Was that perhaps as a result of the latest fire?

It seems that this business flourished originally on the trade with breweries, which used the hard brush produced by the thousand at Corsham. Later of course, the need for stove brushes, sweeping brushes, and dandy brushes for horses declined and other outlets had to be found. Apparently a new market was found in the milk-producing business, where there was a continuing need for hard sweeping brushes and smaller ones for cleaning the equipment. Needless to say the firm needed a ̳travelling salesman‘, and this duty was undertaken by Mr Abraham Amor, who was employed for over 50 years. Originally he travelled with a horse and van, then in 1912 a motor vehicle was obtained – a pioneer venture in using a motor van for trade purposes in Corsham. On the retirement of Mr Amor,

Alan Gough took over the duties of salesman, and was a very well known figure in almost every milk-producing farm for hundreds of miles around.

We know that the firm was still operating in 1961, but have no further information. Acknowledgement is due to an article written by William Light, Parish Clerk, sometime in 1961, which sparked interest in investigating this local business further.