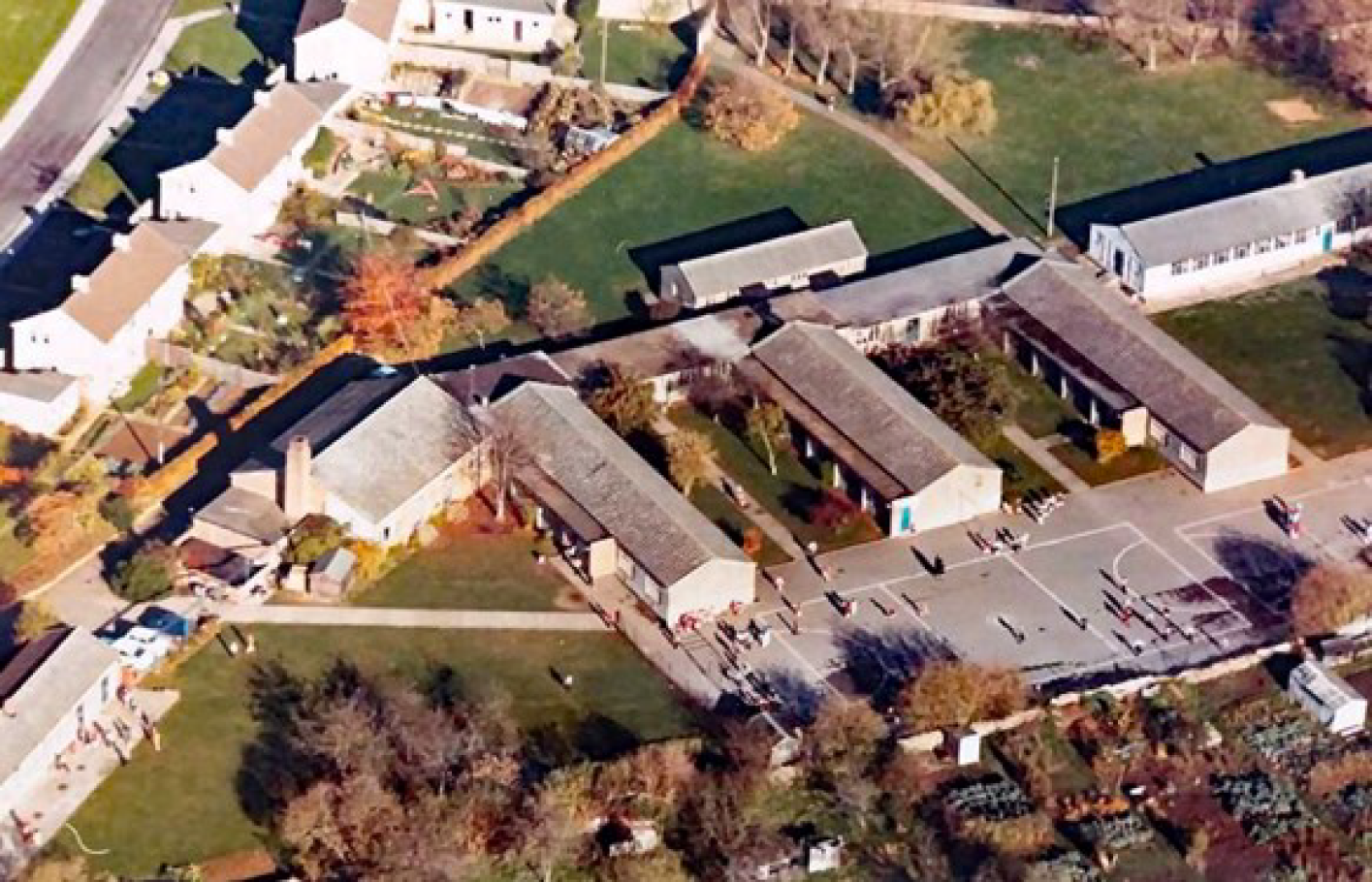 1947
Sept 8 School re-assembled after Summer holiday. There are 11 children of 14+ years continuing following the raising of the school leaving age. Had to create extra Infant Class 1B – taken by Mrs Hull. Standard 1A moved to large room adjoining wartime nursery, now vacated.
Mr P.J. Laurence of Cleevedale Road joined the staff as a trainee. He will assist Head with the 14+ group using the 2nd room of the nursery area as a workshop classroom. (Jack Laurence was educated at the Council School and won a place at Chippenham Secondary School, later known as the Grammar School. On leaving school he entered the Merchant Navy and sailed with Harrison Lines of Liverpool. He rose to become 1st Officer on many of their ships and served all through the 2nd World War and was not sunk once!!)
Sept 30 14+ group visited the Corsham Fire Station with Mr Laurence and the Head for the purpose of seeing the firefighting equipment and gaining information on how the station works. The fire station lies opposite to the Methuen School in South Place.
Oct ? Accident to Robin Doyle. Climbed on to the roof to get a ball, broke a window and badly cut his knee. Boy taken to Dr. Wheeler for stitches and then taken home – he broke the school rules.
Nov 20 School closed on the occasion of the wedding of Princess Elizabeth to Lieut. Philip Mountbatten.

1948
Jan 16 Corsham Cooking Depot opened at the end of Paul Street. 144 children taking lunch. Extra staff needed for serving and washing up.
(The Central Kitchen, as it became known, was in operation until the late 1950s)
Feb 25 Managers interviewed Miss M. Farmer of Abingdon and was appointed. (Miss Mary Farmer, passed away in December 2018 at the age of 95)
Mar 11 Lady Helen Asquith HMI for Wiltshire, visited the school and saw the work of 2 students. (Lady Helen Asquith was still HMI for Wiltshire in the mid 1960’s and she had a penchant of nodding off during the teacher’s lessons then waking up and asking a series of questions of what had been taught!!)
Dec 11 33 senior children visited the Theatre Royal, Bath, to see Hans Anderson’s ‘The Snow Queen’. Grant aid of £3 provided by the LEA.

1949
Jan 7 30 5yr old children admitted now chairs have arrived – they were in a dirty condition, the chairs, not the children.
Jan 13 Mr P.J. Laurence left Regis School today to proceed to Coopers Hill Emergency Training College. Mr Laurence has been here since September 1947 and has achieved excellent results. Presented with books from the staff and senior boys. (Jack Laurence returned to Regis School as a member of staff and stayed until transferring to the Secondary Modern School in 1955 where at first he taught Geography then he taught Mathematics until his retirement.)
Mar 30 29 senior pupils with Miss White, Mr Collins and the Head visited London. Conducted over the Houses of Parliament by David Eccles, the Chippenham MP, also visited Westminster Abbey, St. Paul’s and the Tower of London.

1950
June 26 Mr Dennis R. Jones, from Burderop Park Training College was appointed as Qualified Assistant Master. (I knew Dennis Jones very well. He was Miss Farmer’s brother-in-law and was for many years the organist at Claremont Methodist Church in Bath. He was a fine musician.)
July 18 Annual Prizegiving. Head reported increasing problems of accommodation causing duplication of all classes. Number on roll exceeded 500 would reach 530 in September and 600 within a year. Of the 31 leaving at the end of term, 25 were continuing education at Grammar and Technical Colleges.
July 19 Patricia Cottle, a pupil from the Rudloe Estate, collapsed on the path at 1.40pm and was unconscious. Dr. Wheeler was called and the child was taken to Chippenham Hospital where she died. Post mortem revealed a blood clot on the brain.

1951
May 28 96 juniors commenced a scheme of attendance at Beechfield House, Bath Academy of Art in conjunction with 1st year teaching practice. Attending every Monday for 8 weeks. (This activity continued for many years and was greatly enjoyed by those pupils attending.) June 4 26 senior boys with Mr Laurence spent an afternoon visiting Avonmouth Docks.
June 28 32 Senior pupils visited the Festival of Britain South Bank Festival.

1952
Jan 8 Mr Brooks, present caretaker becomes grounds man for 8hrs per week and he’s given up work with the School Meals Service. The Senior Girls Class moved to the Community Centre where they are to be housed because of the continual growth of the school and the appointment of additional staff.
Feb 15 A special service was observed in the school hall on the occasion of the funeral of King George VI.
July 3 Senior school outing – 88 children and 21 staff travelled to Bristol by motor coach and enjoyed a sea trip on the ‘Bristol Queen’. (Bristol Queen along with Cardiff Queen were paddle steamers owned by P & A Campbell and were only built 2 years previously.)
Sept 8 School re-opened. HMI report received. (MDR started in this school today and was placed in Miss Munnery’s class. Mr Hull, the Head, and my father spent some time discussing the recent Farnborough Air Disaster in which 31 people died. Mr Hull had attended the show had saw the accident happen.)

1953
Jan 6 School re-opened. 3 classes now at the Community Centre. All the furniture removed from the Baptist Chapel schoolroom.
Oct 26 School re-opened after half term. Form 2A using Baptist Chapel schoolroom were withdrawn from that building. Reports from parents concerned about mental worries of the girls having to pass through the graveyard each day plus the toilets were condemned too. (2A was MDR’s class and he remembers the move back to school, we lost the slide and swings in Arnolds Avenue playing field.)

1954
July 23 H.E. Hull appointed 1st Head of the new Secondary Modern School starting in January 1955. Miss Munnery left – getting married.
Sept 6 Mrs E.I. Hancock took up supply teacher duties during Miss White’s continuing absence. With the reorganisation of Secondary education taking place next January, all senior classes are now mixed. Because of increased senior numbers, the Town Hall is now used for an odd class.
Oct 15 H.E.H. caned 3 boys from the British Legion class who broke down a fence of a private garden, stole fruit and did damage to a young tree – 2 strokes for Hunt, Jenkins & Reilly.
Nov 1 From this date H.E. Hull relieved of duties as Head of Regis School. P.J. Laurence will be acting Head. Miss Sheila Riley, new teacher for the Secondary Modern school, at Regis now until January.

1955
Feb 14 Miss Ann Hale, school clerk 1st mentioned. (She later became Secretary at the Secondary Modern School.)
Feb 16 Mr Shepard asked by the Managers to become Deputy Head.
Feb 18 Mr George Pearce, the new Headmaster, visited the school –takes up duties after Easter.
Mar 9 Presentation to H.E. Hull on leaving as Head for the last 12 years. School closed for the rest of the week to facilitate moving of furniture with the reorganisation of Corsham Schools. Mr Laurence, Mr Williams, Mr Bollen, Miss Oatley, Mrs Hancock, Mrs Weller and Miss Hale all transferred to the Secondary Modern school.
July 8 252 children taken to Bristol Zoo by coach – outing much enjoyed.
July 22 81 children left the school. 15 to Grammar School, 62 to Secondary Modern, 1 to private school, 2 emigrating to Canada and 1 leaving the district. Mrs Tustin retired – 11.5 years at the school.
Sept 5 School re-opened. Head + 15 teachers and 352 children in the Juniors. MDR in Class 1 with Mr Shepard, 21 boys and 23 girls. All classes have over 40 on roll. Infants 176 + 352 Juniors, NOR = 528.
Oct 3 3.50pm. Victor Kaljushko, goalkeeper, the crossbar fell on his head which was later stitched.
Nov 19 Choir of 44 children were entered in the Devizes Eisteddfod and gained 1st class certificate – choir taught by Mr Kilminster.
Nov 23 108 children and 74 staff travel by coach to Bath to see Let’s make an opera.
Dec 14 Punch & Judy show for the Juniors’ Christmas party.

1959
June 30 Mr Harry Allen, Woodwork teacher, sustained a serious accident in the Handicrafts room when struck on the head by a block of wood, which broke away from a wooden bowl being made on the lathe by a pupil, Richard Toogood. Dr. Henderson attended and Mr Allen was taken to Bath Hospital by ambulance.
July 21 2nd Speech Day with prize giving in the hall with Major Awdry as the guest of honour. He was Chairman of the Calne & Chippenham Rural District Council.
Sept 7 School re-opened for the Autumn Term and the new staff appointed were Mrs Howarth PE, Dennis Jones (Geography) and Mr Wyatt, Handicrafts. 2 new classrooms were opened at the east end of the main building. Existing scullery, with new extension, opened as a kitchen with Mrs Gardner as cook supervisor. School meals, up to then, had been prepared by the Central Kitchen, opposite the school at the end of Paul Street. Additional rooms were used at the Community Centre because of rising numbers.
Dec 10 -12 School play production. The plot and play produced by Roger Stansfeld, English teacher.

1961
July 29 Corsham Secondary Modern School closed for the Summer holidays. From September 1st there will be 2 Secondary Schools in Corsham: one for girls with Miss Simpson as Head, Miss Oatley as Deputy and one for boys with Harold Hull as Head and Mr Gee as Deputy.

The Log Book was transferred from the combined School to the Boys School and Harold Hull commenced entries as the new Head.
Sept 13 The County Secondary School for Boys opened 2 days late due to the late delivery of furniture.