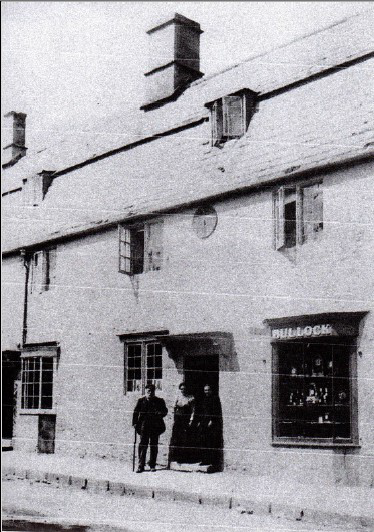 Recently, I was much cheered by negotiating a part-exchange of our old, failing grandfather clock for a mid-19th century one by Mr Thos. Bullock, made in Corsham [it’s on the clock face!] whose shop in Pickwick Road I have worked out is now Corsham Hardware, No. 27. The part-exchange was with a reputable antique longcase clock, barometer etc. dealer who has a shop in Swindon – http://www.allansmithantiqueclocks.co.uk/ and sells them all over the world: he remarked that he liked the thought of our Thos. Bullock one ‘coming home’ to Corsham!

The Bullock is really beautifully painted as is shown by the photos. on the previous page and front cover. On either side of the ‘Moon’ face, there is a lovely pastoral scene featuring two figures in the foreground, a church and settlement in the distance. There is also a sea scene which comes into view as the clock movement goes through the course of a month. The sea scene features a wherry, a type of sailing barge with large sails which was developed to replace earlier cargo boats. The term wherry is also associated with a particular type of lighter used on rivers. The clock on the outside wall of the Masonic Hall (see below) was also made by the same Thos. Bullock!

The history of the Bullock family has been researched by Pat Whalley.* They were clockmakers in Box, Corsham and the local area for some 200 years, although it is possible that they date back even earlier. It seems that one Zephaniah Bullock, born about 1725, is first identified in Box in the early 1750s when his children were baptised in the local church. His occupation is shown as a watch & clockmaker. After marriage to Elizabeth Shell at Box, they produced seven children, all boys. Zephaniah (2), the eldest, also described himself as a watch and clockmaker. Five of the sons can later be proved on various censuses to be married and set up in business as watchmakers.

Now the family spread out a little – the children of Zephaniah (2) were born in Bradford, Trowbridge, Corsham and Box. His brother Thomas (1) had a son born in Melksham. Further down the line, they branched out towards Corsham and Chippenham. The Bullocks were now well established and must have been well-known in this local area as watch and clockmakers of repute. Thomas (2) Bullock of Box 1795, fifth son of Zephaniah (2), married Elizabeth and had seven children – two boys, who naturally became watchmakers, and five girls.

In 1839 Thomas (2) had a business in Lacock Road, Corsham, and in 1848 he was located at Pickwick Road. Following the death of Thomas (2) about 1851 the family remained in Pickwick Road and Thomas (3) (born 1821) moved from Priory Lane [now ‘Street’], where he had settled with his wife Mary and six children, to help to run the business. Thomas (3) is shown in local trades’ directories between 1861 and 1881 as conducting the business from Pickwick Road. His son, Stephen Merrett duly took over the responsibility from about 1885.

It is known that there was a further clock from this period placed above the main door of Clock House, Box (since demolished to make room for the Co-op store) . Stephen is also known to have produced a turret clock for Neston Park stables in 1859.

Apparently, that is where the information dried up in respect of the Corsham Bullocks but Pat had some further historical details about Bullocks in Box and Chippenham into the 20th century. Indeed, Pat noted that there were many Bullocks recorded in WW1 but that was something to be pursued perhaps later. Pat also produced a detailed and useful family tree and I commend Pat’s research.