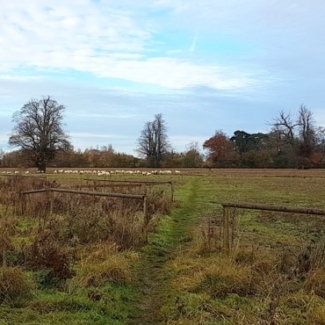 The long running disputes over this planning application continue [see Summer 2017 issue, pps. 5-6] with Wiltshire Council planning officers.
Issues of fundamental importance continue to cause serious concern in this case in two areas – Land Stability and Minerals Planning Consents – that should have received close and careful attention from the outset five years ago.  Errors and omissions by officers made then, despite having been drawn to their attention, are persistently ignored.
In the July issue we noted – over-optimistically, with hindsight – that the legal and Geotech information commissioned and paid for by The Pickwick Association (TPA) and made available to Wiltshire Council’s planning officials, “…should certainly give the case officer cause to reconsider his stance when redrafting his report…” to the planning committee that, at the time, was due to consider Redrow’s two ‘Reserved Matters’ applications.
It didn’t.  All of the provided information, as well as five well-researched, accurate, relevant, professionally delivered personal statements (made by three residents, plus Ruth Hopkinson and Neville Farmer for the Town Council), to the planning committee when they met on 6 September was totally ignored. A token interest in a single WWII tree apart, not a nod of acknowledgement was shown by officers or the committee’s chairman towards ANY of the points made in ANY of these statements (all were mailed individually and in advance to every member of the committee). The applications were approved by six votes to two; one member, so disinterested they couldn’t be bothered to vote, even abstained!
Land Stability – In his January 2014 report recommending refusal of Gladman’s initial application the case officer wrote “It is apparent from the reports submitted that due consideration has been given to the NPPG guidance on assessing stability issues and by extension the relationship between the /former/current underground mining operations and the surface of the application site. The recommendations set out in the [developer’s] report in relation to the structural implications of mining activity beneath (or in the vicinity of) the proposed housing are of course circumspect; however, for obvious reasons, this is to be expected. From a purely geotechnical perspective, it is found that the submitted reports appear to provide sufficient information upon which to reconcile site stability with the principle of development, [our emphasis] in accordance with paragraph 121 of the NPPF”.
Those reports on behalf of the developer addressing the fundamental principle of putting a housing estate immediately on top of a working stone quarry should have been subjected to rigorous independent professional scrutiny before concluding that they “…appear to provide sufficient information….”.  They were not; the detailed independent scrutiny conducted for TPA by GWP Consultants LLP (see paragraph 2 above) was supplied in full to WC in June, but has been totally ignored. The fact remaining today is that the veracity of those “submitted reports” that “…appear to provide sufficient information….” has been clearly shown by the evidence submitted to WC in GWP’s reports to be gravely misleading.  WC have consistently ignored this in the past and obstinately continue to do so now.
Minerals Planning Consents – Condition 8 of Wiltshire Council’s current Mineral Planning Permissions relating to the site permission N98/1945 includes the following requirements pertinent to this application:
“Notwithstanding the provisions of the Town and Country Planning (General Permitted Development) Order 1995 (or any Order amending, replacing or re-enacting that Order), no buildings or fixed plant shall be installed, erected, modified or placed within the surface area of the site without the prior written approval of the Mineral Planning Authority.” [our emphasis}
In his proof of evidence dated 23 December 2014 to the planning inquiry The Council’s Environmental Health Officer (EHO) stated: “My reading of this condition would be that the development would not be able to proceed without the written approval of Wiltshire Council’s Mineral Planning Authority which to my knowledge has not been sought nor is it likely to be agreed”. TPA have been unable to find any evidence in the public domain that the required written approval was subsequently sought or been given.
Council officers, asked if written approval was indeed given by the Mineral Planning Authority, and to provide copies of such approval for the proposed development, replied including the following:  “No written approval specifically under the terms of this condition has been sought……..”
The remaining conditions – numbers 22 & 23 – These are two inter-related conditions that must be satisfied – by September 2018 – before any development can commence.  They require mitigation of the potential effects on residents of houses on the site of noise and vibration from underground mining underneath it.  Gladman (note, the originator of this proposal, not Redrow) have made several attempts to discharge or amend them, all of which so far have failed.  Wiltshire Council’s latest information is “With regard to the mining condition, we recently met with the Applicant’s consultants to agree a way forward and it is likely they will need to go back to virtually the start of the process to ensure we are provided with robust data and modelling. We have agreed a considerable extension of time to allow for this, which will not be a quick exercise.
David Taylor, Chairman, Pickwick Association