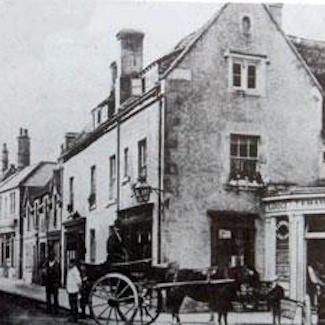 The Baines family seemed to have settled in Corsham around 1870.

John Baines, who had been born in Bradford on Avon, and his wife Maria and four children are recorded in the 1871 census as living in High Street.

He was a chemist, stationer and bookseller, and he also bottled wines. Very appropriate, as they lived at the building we know as Allen & Harris, but had long been known as the Wine Lodge. (see the Gordon Farleigh story).

Their son Francis followed in his father’s footsteps, and continued to run the family business up until 1920. He married Martha, and they had five children.

Their eldest son Herbert also continued the family tradition and ran a grocers and confectioners shop in Pickwick Road. During WWl Herbert served in the Royal Engineers from 1915-17, when he was invalided out.

His younger brother Reginald joined the war effort when he was old enough – 1918, and was a CPO, RN. serving on patrols and on escort ships.

It was Herbert however, of which most is known. He continued his life in Corsham, was Secretary of the Gas Company, and of the Gasworks from 1920. His wife Ethel presented him with a daughter – Edna, who was later to become the wife of Victor Beavers, the couple lived in Pickwick Road, and ran the Corshamside Dairies.