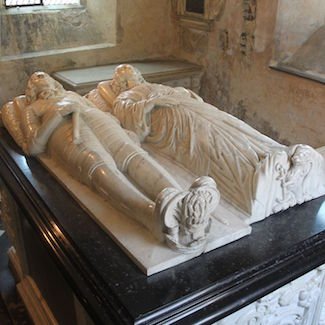 The Hungerford family owned Farleigh Hungerford Castle, on the borders of Wiltshire and Somerset, for some 300 years.

Monuments at the castle show the family’s occupation from 1369. Their position at the Royal court fluctuated with each new monarch, as was the norm.

Edwards brother, Anthony Hungerford, had a son also named Edward (1632-1686), who eventually inherited Farleigh, and unfortunately gambled and squandered his fortune away, resulting in the castle being sold in 1686.

In 1625 he was made a knight of the Bath at Charles l coronation.

Edward Hungerford became Sir Edward. He was allied with Oliver Cromwell and was a Roundhead leader for the area during the Civil War. At various points Edward was MP for Chippenham, Cricklade and Wiltshire.

His wife is of course well known as the lady who financed the building of the Almshouses & Freeschool in 1668.

Hungerford died in 1648 and was buried in St Anne’s Chapel, the north transept chapel of St Leonard’s Chapel within the walls of Farleigh Castle. His magnificent tomb chest, with effigies of himself and his wife, survives.