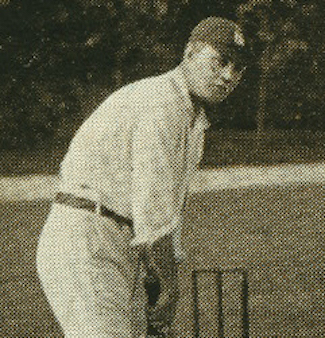 S.P. Kinnier (“Sep”) was born in Pickwick in 1871. A left-handed batsman, he played for Corsham during the ‘golden’ Spackman years, scoring 4919 runs and hitting five centuries.

Septimus was the first of two Corsham born and trained cricketers who eventually played for England, the other being ‘Big Jim’ Smith.

From 1890 he made a steady contribution to Wiltshire’s fortunes, and in 1896 was engaged by Warwickshire as a professional on a salary of £80 per annum.

Early in 1911 he made his highest score – 268 v Hants. In the same year he was selected to join the Ashes tour of Australia. During the tour he played in five matches, including the first Test.

“Sep” was known to be sensitive about his baldness, and was rarely seen without headgear. His natural reticence created an air of mystery and a close friend, Frank Foster, claimed “he never married” but the Spackman Diaries of July 1923 announced his forthcoming marriage, which it is believed took place in the August of that year at a Birmingham Registry office.

Riding his faithful motorcycle in 1928, Sep suffered a stroke which proved fatal.