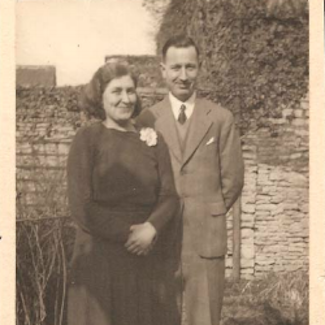 Robert Gordon-Farleigh moved from Bath to Corsham in 1935 when he purchased the ‘Wine Lodge’ in the High Street. (Now occupied by estate agents Allen & Harris). Previously Mr & Mrs Baines had run it as a wine merchants.

Robert and his wife Elsie (both pictured above) had a family of seven children, five of whom were born at the Corsham Maternity home. Playtime for the children was mainly in Corsham park at the rear of the property. Daughter Norah particularly remembers a large house with seven bedrooms, and a garden in which her father could grow vegetables and flowers.

There was also a large store at the rear and cellars running under the shop. In extreme weather, the cellars flooded and everyone was sent down to ensure that the bottles of wine were stored high enough to be safe.

The safe keeping of the wines was very important due to the building being subject of an irrevocable licence, granted to the property by King Charles I. It is understood that only three such licences were granted in the country. In 1617, at a Court Baron of the Lord of the Manor of Corsham patents were given in order to regulate or restrict trades which involved danger to public morality and order. (The demon drink!)

One of these Patents was the Patent for inns. It appears that Christopher Nott was the first to obtain such a licence in respect of his premises called the Red Lion. (Now known as the Methuen Arms)

The first reference to be found regarding such a licence for the Wine Lodge is found in the Court Rolls under Paul Methuen in 1775. When the Methuen estate obtained the building from one Walter Kington Taylor.

After 30 years of hard work running these premises with the family Robert had to retire due to ill health.