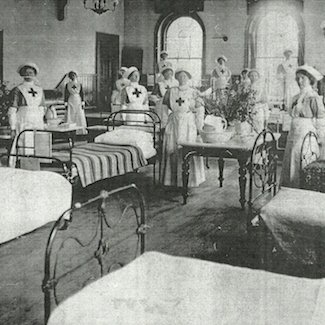 Charlotte was born in Suffolk in 1861, daughter of Alexander Robert Campbell-Johnstone, a Foreign Office Diplomat. She was married in 1886 to Captain Cecil Hedworth Williamson of the 4th Dragoon Guards. Cecil retired in 1891 after which the family, Charlotte, Cecil and their son Huddleston, moved to Middlewick House, Pickwick, Corsham.

Why they settled in Corsham is unknown, but it is possible that they may have known the Goldneys, the Dunstervilles and the Clutterbucks, all with strong military connections, and all in the same social circle. Sadly, Cecil died in 1909, but Charlotte remained at Middlewick, and took her part in community life.

When WWI reared its head, she was a member of the Red Cross Society and became Divisional Secretary of the Chippenham Division. This division managed and organised all of the support for the local hospitals.

She was also a Commandant of the Biddestone Voluntary Aid attachment, recorded on the monument in the Town Hall, and she ran a working party of ladies to undertake Red Cross related needlework, such as making shirts, hats etc., and repairing garments where necessary.

Charlotte was later recognised for her service with the title ‘Lady of Grace of the Grand Priory of the Order of the Knights Hospitallers of St John of Jerusalem’.

She died in 1941 and this title is engraved on her gravestone at Corsham Church, where she lies with her husband Cecil.

Their son, Hudlestone, also followed a military career, he was a Major in the Royal Field Artillery and received a Military Cross and Distinguished Service Order.