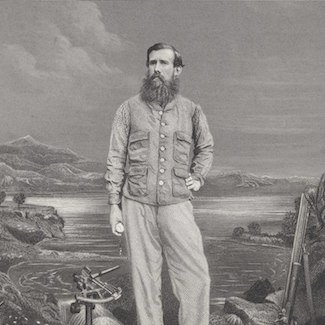 On the edge of a field by a dry stone wall on the Neston estate is an epitaph to John Hanning Speke.

He was among the greatest British explorers of the Victorian era, whose greatest achievement was the discovery of the source of the White Nile – the holy grail of Victorian exploration.

Speke died from a self-inflicted gunshot wound whilst shooting partridge on the Neston estate, at the age of 37.

John Hanning Speke was born on 4 May 1827 in Bideford, Devon. He served with the Bengal Native Infantry from 1844-1854. He obviously had a love of adventure as, aged 27, he joined an ill-fated expedition to Zanzibar led by Richard Francis Burton (1821-1890) and explored the Wadi Nogal region in Somaliland.

In 1855, both Speke and Burton were badly wounded when Issa warriors attacked Burton‟s camp, at Berbera, on the Somali coast. Speke returned to England to recover and then volunteered for the Crimea.

Speke accompanied Burton‟s 1856-1859 expedition across Central Africa. They were looking for the large lakes thought to exist in the continent and were also hopeful of identifying the source of the Nile.

They were the first Europeans to discover Lake Tanganika in 1858, but then Burton contracted malaria and had to turn back. Speke carried on alone and on 3 August 1858 discovered what he named Lake Victoria in honour of the Queen, later proved to be the source of the Nile. Much of the expedition’s survey equipment had been lost at this point and so vital questions about the height and extent of the lake could not be answered.

It was understood Burton and Speke had an understanding they would announce their findings together to the Royal Geographical Society (RGS), but when Speke returned to England before Burton, on 8 May 1859 he made their trip famous in a speech to the RGS where he claimed to have discovered the source of the Nile.

Burton returned on 21st May, and was angered by Speke’s precipitous announcements. A further rift was caused when Speke was chosen to lead a subsequent expedition without Burton.

The quarrel between the two explorers was never settled, and the pair were due to debate one another in Bath on 16th September 1864, the day after Speke died in tragic circumstances.