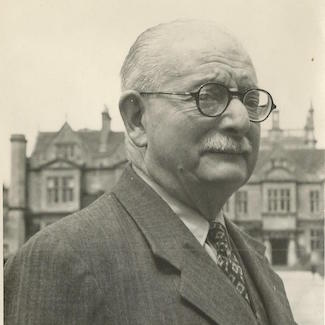 AJ Hobbs was born at North Bradley and for 60 years ran a saddlers, and later a cycle repair business, from his premises in the High Street (now the dental surgery opposite Alexander House).

In those days it was a dark little shop, a complete clutter of old cycle parts, tyres, tools trays of nuts and bolts with scarcely room to stand.

As if to escape the gloom, AJ Hobbs spent much of his time at the front door. This worked in Hobbs’ favour – as for half a century he was the local correspondent for the ‘Wiltshire Times’. Few people who mattered in local affairs failed to drop into the little shop for a chat, and few ‘happenings’ escaped his attention.

For thirty-six years he was a member of the local Fire Brigade, and wore the famous silver helmet of Captain for fifteen years-service.

He served in the Royal Field Artillery during the 1914 war, was an archdeacon of the Baptist Church in Priory Street and a lifelong Liberal supporter.

A great lover of the town of Corsham, AJ Hobbs gathered together during his lifetime an extensive collection of historical relics, found locally. These included a Roman dice of the type which the Roman soldiers might have cast lots for Christ’s clothing at the crucifixion, and a rare roman lamp in the shape of a foot.

These artifacts have now been deposited at the Chippenham Museum for safe keeping.